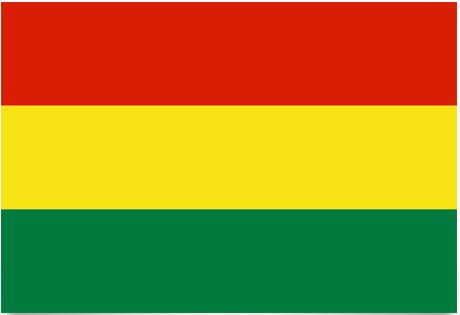 Bolivia’s flag consists of three horizontal ribbons in the colors red, yellow and green. The upper red ribbon symbolizes the struggle for freedom, the yellow in the middle stands for the country’s mineral deposits and the lower green stands for nature. Bolivia became independent in 1825 but that was not when their current flag was decided but then the colors were yellow, green, red from above, this was the same as the flag of Lithuania.

The flag received its current appearance by a decree of President Manuesl Isidoru Belzu on November 5, 1851. The proportions of both the civilian and state flags are 15:22. Like several other South American countries, the civilian flag lacks the nation’s coat of arms, but it is on the state flag.

Bolivia – the land without coasts – consists of 3 natural regions. Altiplano (high plateau) with an average height of 4,000 meters above sea level is dry and cold. The majority of the population lives here. Here are the country’s mineral riches: tin, gold, silver, zinc, lead, tungsten and copper. “Yungas” and the valleys on the eastern side of the Andes mountain range have a subtropical climate. Coffee, cocoa, sugar cane, soya, coca leaves and bananas are mainly produced here. In the flat tropical lowland areas to the north and east, the landscape is predominantly forest and savanna. Cattle farming is widespread and rice, soy and sugar cane are grown. There is also oil in the subsoil. Bolivia is territorially divided into 3 valleys that open into Lake Titicaca, the Amazon River and the La Plata River. The unrestrained and uncoordinated exploitation of forest resources is a threat to forests, fauna and water resources.

The people: Bolivians are predominantly from the Quechua and Aymará people (57%). About 25% are «mestizer» (a mixture of Europeans and Native people), and there is also a small minority of European descent. They form the ruling class. In the eastern part of the country there is finally the tupí-guaraní people.

Language: Spanish (official). More than half of the population also speaks their own languages ​​- quechua, aymará. There are a total of 33 linguistic ethnic groups.

Government: Juan Evo Morales Ayma has been President and Head of Government since December 2005, re-elected in December 2009 and 2014. This is a two-chamber system with a 130-member Chamber of Deputies and a 27-member Senate.