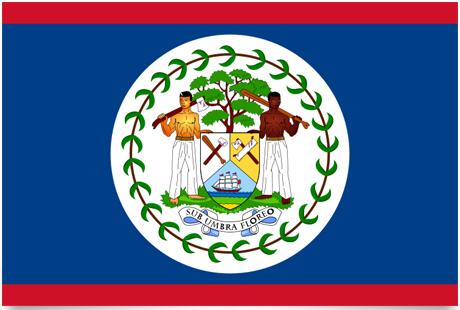 The Belize flag is blue with narrow red stripes along the upper and lower edges and was adopted on September 21, 1981. In the center of the flag is a white circle with the Belize coat of arms. The blue color represents the state-supporting party PUP, and the fifty leaves of the flag refer to the year 1950 when PUP came to power. The flag was used unofficially even before the country’s independence and became official in 1981 when two red ribbons representing the opposition were also added.

One figure holds an ax and the other an oar, which represents the country’s important forest industry and shipping. At the bottom of the coat of arms is a ribbon loop that contains Belize’s dialect, Sub Umbra Floreo, which can be translated to ?? In the shadow I thrive ??.

Belize forms the southeastern part of the Yucatan Peninsula. Lowland, with warm and rainy climate in the north. In the south, the countryside is hilly and various crops are grown here. The northern coastal areas are swampy and surrounded by flat islands. The southern coastal areas have excellent natural harbors between the coral reefs. It is thought that there are rich oil deposits in the coastlines. The country suffers from the same problems as the rest of the Caribbean island communities, such as the destruction caused by the sea and soil erosion. Near the major cities, the water is contaminated by waste from sugar production. Industry wastes, which are simply dumped in the oceans, have created enormous health problems for the country’s residents and have led to extensive fish deaths.

The people: The “English” population, of African descent, which historically constituted the majority, has now been reduced to take second place by 29.8% of the population, while the population growth among the Spanish speakers has now represented 43.6%. Mayan Indians make up 11%; garifunas 6.7%; the European minority group 3.9%, Indians 11%, and some Chinese and Arabs.

Religion: 60% are Catholics; the majority of the rest are Protestants.

Language: English is the official language; Spanish, Quiché and other Native American dialects are also spoken.

Government: Parliamentary Monarchy. Queen Elizabeth the 2nd of England is head of state; Colville Young is Governor-General; Dean Barrow has been prime minister since February 2008, re-elected in 2012 and 15. The Legislative Assembly consists of a 31-member House of Commons, elected by universal suffrage, and a House of Commons Senate, with 12 members appointed by the Governor-General.