Where is Belarus located on the map? Belarus is an independent nation located in Eastern Europe. Check out the following images to see location of Belarus on maps. 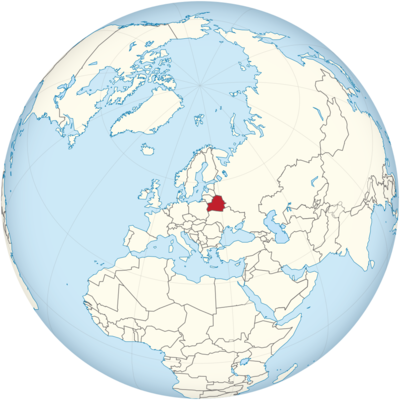 Belarus is located in the east of Europe. The neighboring countries are Russia, Ukraine, Poland, Lithuania and Latvia. The country has no access to a sea, which is why it is a landlocked country. The country is at its greatest extent from west to east 650 kilometers wide, while it measures a maximum of 560 kilometers from north to south.

Belarussian and Russian means Belarus Belarus. This can be translated as “white Rus” and this is how the German name Belarus came about. However, in the Middle Ages, bely did not mean white, but western. So actually “Western Rus” would be correct. Slavic domains like the Kievan Rus, from which Russia emerged, were called Rus.

Belarus is located in the east of Europe.

Belarus is a very flat country. You can tell from the fact that the highest mountain is only 345 meters high. His name is Djarshynskaya Hara. That means Dzerzhinsky Mountain. Felix Dzerzhinsky was a Soviet revolutionary, after whom not only the mountain, but also a nearby town was named.

In any case, the Dzerzhinsky Mountain belongs to the Belarusian ridge. This is a range of hills that runs through the middle of the country. It in turn lies in the Eastern European level. This is the name given to the landscape west of the Urals, which covers all of Eastern Europe.

Rivers and Lakes in Belarus

Many rivers flow through the flat land, the longest of which is the Dnieper. Beresina, Prypjat, Sosch and Memel also measure between 460 and 610 kilometers each. Due to the rivers and the many lakes, the country is rich in water. The largest lake is called Naratsch and is located in the northwest on the border with Lithuania. Marshes and bogs are therefore also typical of the landscape. Around 40 percent of Belarus is covered by forest.

In January, the average temperature is minus 4.5 degrees in the southwest and minus eight degrees in the northeast. So it gets cooler towards the northeast. In July the difference is smaller and it gets warmer to the south: in the north the temperature is 17.5 degrees, in the south it is 18.5 degrees. The summers are quite humid, with most of the rain falling between May and September. High humidity also often creates fog.