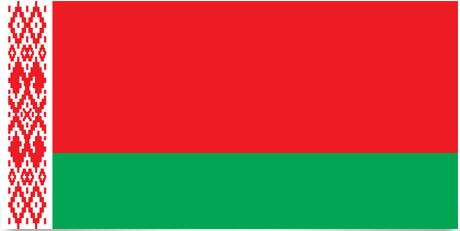 The flag of Belarus was adopted on 7 June 1995 following the referendum held the month before. The former flag, which had been used until the dissolution of the Soviet Union, was then replaced by this flag. The former flag had also been used by the Belarusian People’s Republic between 1918 and 1919. The flag contains two horizontal fields, the upper field which is red and the lower field which is green. The top field makes up the majority of the flag as it is twice the size of the green field. At the far left, a ribbon goes over both fields with a white-red pattern.

An earlier flag was used in Belarus after the First World War when an independent Belarusian republic was formed which lasted only between March and December 1918. At that time, a flag in the colors white and red was used.

Belarus is located between the rivers Dnieper, Zapadnaja Dvina, Niemen and the Eastern Bug. In the west, the country borders Poland, in the northwest to Latvia and Lithaun, in the northeast to Russia and in the south to Ukraine. The landscape is flat, with numerous swamps and lakes. Mixed forest covers one third of the land. The climate is moderate continental, with an average temperature between 17 and 19 degrees in summer and 4 to 7 degrees below freezing in winter. Due to its location near Ukraine, the Republic received a high dose of radioactive fallout in the Chernobyl nuclear power plant disaster in 1986. A quarter of the agricultural land is polluted as a result of excessive use of pesticides.

Social organizations: Belarus professional union. The Free Trade Union consisting of 9 strike committees. This, together with the Association of NGOs and Charter 97, are the main participants in the Coordination of Democratic Organizations, which is the main opposition organization.

Government: Executive: President since 1994, Aleksandr Lukashenka, re-elected in September 2001, 2006, 2010 and 2015; Prime Minister since December 2014, Andrei Kobyakov. The National Assembly has 2 chambers: the House of Representatives with 110 seats and the Soviet Union with 64.

Paramilitary forces: Border Corps: 8,000 men; belongs to the Ministry of the Interior.