Where is Barbados located on the map? Barbados is an independent nation located in North America. Check out the following images to see location of Barbados on maps. 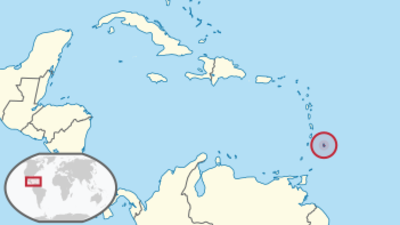 Barbados is part of the Lesser Antilles archipelago. However, Barbados falls out of the band that these form, because the island is east of it. It is located in the Atlantic and not in the Caribbean Sea, but is still counted among the Caribbean islands. The island state has another small, uninhabited island called Culpepper Island. It’s actually just a rock and measures just 40 by 50 meters.

Barbados itself is 430 square kilometers. That is about the size of the German island of Usedom. The length of the coast is 97 kilometers. Barbados is rather flat. The land rises towards the center of the island. There is also the highest point on the island, Mount Hillaby at 350 meters. To the west coast it slopes down in terraces, to the east coast in a steeper gradient.

The soil of Barbados is made of limestone. It arose from the massive accumulation of corals. This reef limestone then grew in height. Coral reefs can also be found in the sea around Barbados. In the northeast, water washed away the limestone and created so many caves. Harrison’s Cave, for example, is a tourist attraction.

Where does the name Barbados come from?

Barbados means “the bearded” in both Spanish and Portuguese. We do not know exactly what that refers to. Perhaps the explorers from Europe named the island that because the fig trees’ long aerial roots reminded them of beards. The Caribs, natives of the Caribbean islands, are also said to have had beards. This is also why the name can have its origin.

Here you can see where Barbados is.

It is nice and warm in Barbados all year round. The temperatures fluctuate more on a day than from month to month. Then it is 23 degrees in the morning and 32 degrees in the afternoon (nine degrees difference). The coldest month is January with 25.8 degrees, the hottest August with 27.8 degrees. Here the fluctuation is only two degrees. The average temperature of the year is 27 degrees.