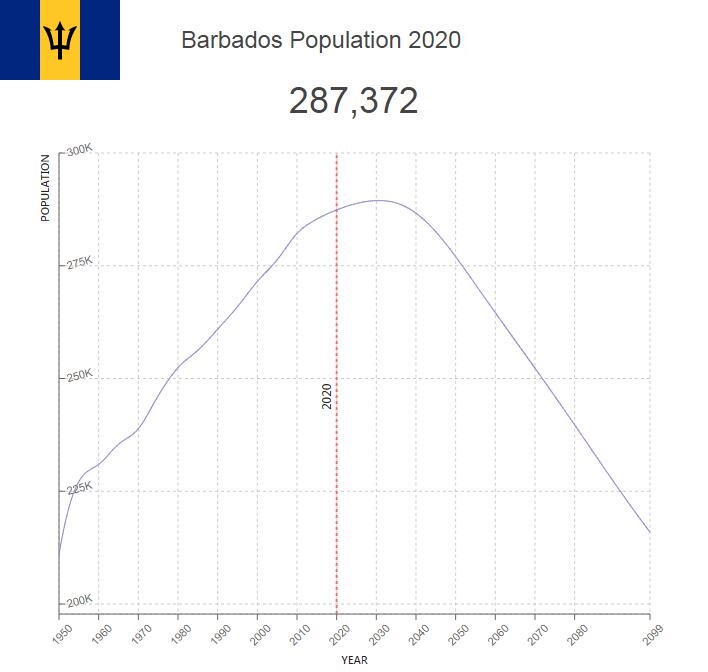 The island state of Barbados is among the Caribbean’s most prosperous states. Tourism has bypassed the sugar industry as a basis for the country’s economy.

The population of Barbados was estimated at 284 644 (World Bank 2013), with an estimated annual population growth of 0.5%. Life expectancy at birth is 77.6 for women and 72.8 for men. Growth has been low since the 1960s, partly due to emigration. About 90% of the population is of African origin, most descendants of slaves who were transported to the island as laborers on the sugar plantations in the 17th and 18th centuries. 4% are of European, most British descent, the others are of mixed origin.

Barbados is the most densely populated of the Caribbean countries, with over 640 people per km2. Biggest city is the capital Bridgetown.

Population of Barbados by Year (Historical)

Major Cities in Barbados by Population

Barbados has more than 90 different registered religious communities. About 70% of the population is Christian. The largest religious community is the Anglican Church with approximately 40%, followed by Pentecostal friends, Methodists, various Protestant churches and Catholics. There are small minorities of Jews, Muslims and Hindus.

The official language is English.