Where is Bahrain located on the map? Bahrain is an independent nation located in Western Asia. Check out the following images to see location of Bahrain on maps. 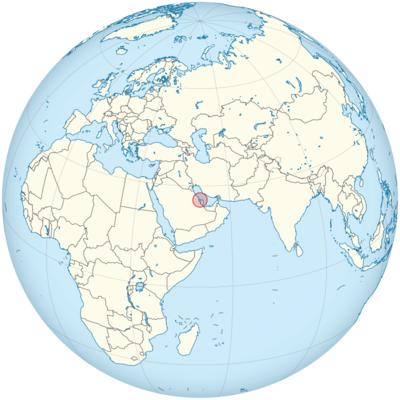 33 islands in a bay of the Arabian (Persian) Gulf and form the Kingdom of Bahrain. Saudi Arabia is to the west and Qatar Bay to the south. Only twelve of the Bahraini islands are actually inhabited. Many islands sink into the Bay of Bahrain depending on the sea level.

The largest island was named after the entire Kingdom of Bahrain and is home to the capital Manama. Most of the islands are made up of some kind of limestone. As in Dubai or Abu Dhabi, Bahraini territory has also begun to enlarge the land area by filling up sand. The highest point in the country is the “mountain” Jabal al Bukhan with a height of 135 meters.

On the map you can see the location of Bahrain.

The climate in Bahrain is subtropical, which means that the humidity is very high. At the same time there is a desert climate. From the north-west there is always a hot wind called Shamal. In summer, daytime temperatures are often over 35 degrees, sometimes even 10 degrees higher. The nights cool off only a little. In summer you can only endure it during the day in rooms with air conditioning. This is not entirely harmless, because the change from hot to cool temperatures can always cause a cold.

In winter the temperatures are then around 18 degrees, during the day a little higher. It rains very little in Bahrain. The amount of precipitation is 70 to 100 millimeters and when it rains it is between November and March. The downpours usually only last a short time.