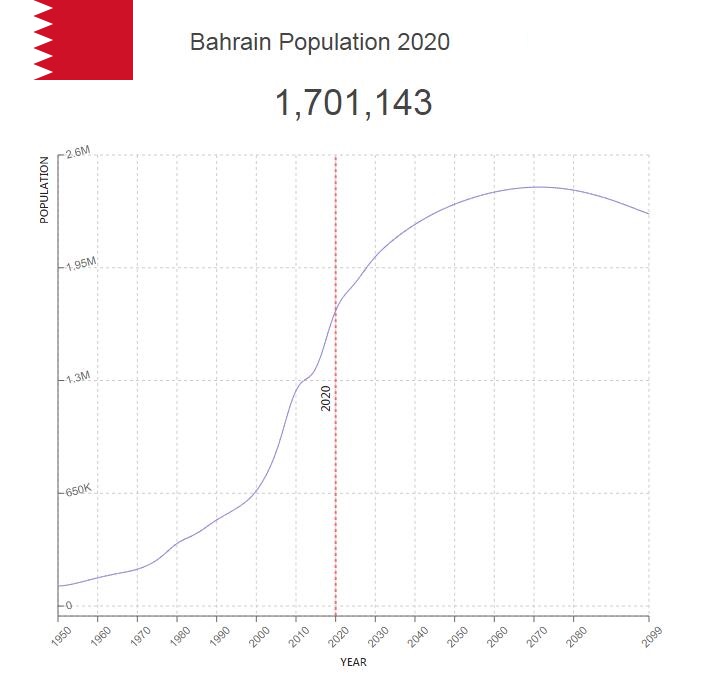 Bahrain in the Gulf of Persia is a rich oil nation. The power lies with the Sunni Muslim royal family al-Khalifa, despite a Shiite majority.

The population of Bahrain is just over 1.5 million residents (2017), including a majority of guest workers. Ethnic Bahrainians make up about 46 percent of the population; over 675,000 people have Bahraini citizenship. Citizens from Asian countries form an almost equal group. Bahrain has the lowest population count of the Gulf States. 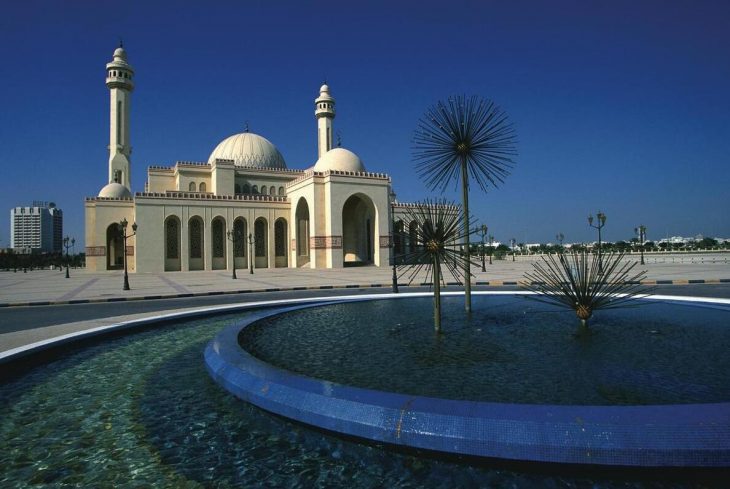 Annual population growth is 2.2 percent. The average life expectancy is 82 years for women and 77 years for men. Due to an overweight of men among the immigrants, the overall gender distribution is skewed.

Most of the settlement is in the northern part of the island of Bahrain and the southern part of Muharraq. Major cities are the capital Manama and Muharraq. Around 90 percent of the population lives in cities.

Population of Bahrain by Year (Historical)

Major Cities in Bahrain by Population

The country is ruled by the Sheikh dynasty al-Khalifa in the alliance of rich trading families from the 18th century; The Al-Khalifa family are Sunni Muslims and attend the Maliki Law School. By the way, the elite consists partly of Sunni Muslims who came from Iran towards the end of the 19th century and who follow the Shafi’i school, and partly of Iranian Shia Muslims who immigrated during the same period. These follow the Usuli School and maintain close ties with Iran and Iranian and Iraqi Shi’a schools and leaders. Some Shia Muslims also attend the Akhbari school.

It is believed that Muslims make up just over 70 percent of the total population, Christians close to 15 percent and Hindus close to 10 percent.

The distribution of the Muslim population, between Sunnis and Shi’ites, is unclear and politically contentious. Since the 1920s, contradictions between Sunni and Shia groups have flared up at regular intervals. After the Islamic revolution in Iran in 1978–79, the situation was tightened. This is again in the 2000s the most pervasive political issue in Bahrain, which also includes accusations of – and fear of – interference from the Shiite neighboring Iran. While the royal family is Sunni, the majority of the population is Shia. The latest official census (from 1941) states that 53 percent of Muslims are Shia. Official sources have stated that there is now a small majority of Sunnis; other estimates show that the Shiite number has risen to somewhere between 55 and 75 percent.