Where is Austria located on the map? Austria is an independent nation located in Western Europe. Check out the following images to see location of Austria on maps. 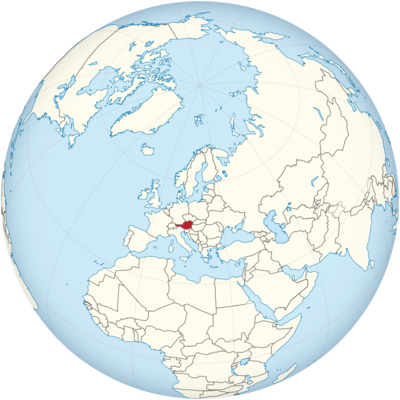 Austria lies in Central Europe. It borders eight countries. Germany and the Czech Republic border Austria in the north, Slovakia and Hungary in the east, Slovenia and Italy in the south and Switzerland and Liechtenstein in the west. Austria has no access to the sea, so it is a landlocked country.

Austria is a federal state. It consists of nine federal states. They are called Burgenland, Carinthia, Lower Austria, Upper Austria, Salzburg, Styria, Tyrol, Vorarlberg and Vienna. Vienna is also the capital of the country. Other large cities are Graz, Linz, Salzburg and Innsbruck.

A large part of Austria lies in the Alps. That is why the country is also called the Alpine Republic. 63 percent of the country belong to the Eastern Alps and are therefore mountainous, only about a third is lower than 500 meters. The highest mountain is the Großglockner at 3789 meters. Almost a thousand peaks are higher than 3000 meters!

The Alps run through Austria in a west-east direction . They are divided into the northern, central and southern Alps. They are separated by deep and wide valleys. The Tyrolean and Salzburg Alps belong to the northern Alps. The Central Alps include many mountain regions, including the Ötztal Alps, the Zillertal Alps and the Hohe Tauern. The Großglockner is also located there. Austria’s largest glacier, the Pasterze, spreads out at its foot. Below is a photo of her. Finally, the Southern Alps include the Carnic Alps and the Karawanken on the Austrian-Slovenian border.

The mountain ranges are broken through by passes. The best known of them is the Brenner Pass. If you want to go from Germany to Italy, you drive this way.

In contrast, the country becomes flatter in the northeast and east. It is hilly in the Alpine foothills and in the Bohemian Highlands, which extend from the Czech Republic into Austria. It is flat in the area that represents the edge of the Pannonian lowlands and in the Vienna Basin. The Pannonian lowlands are mostly located in Hungary and have their westernmost edge here in Austria.

The Danube also flows here. Coming from Bavaria, it crosses Austria in the northeast and also flows through the capital Vienna.

Rivers and Lakes in Austria

Austria lies in the moderate climatic zone. There is a warm to cool temperate climate. In the west of the country, the Alps in particular determine how warm it gets. The higher you go, the cooler it gets. On the highest peaks there is even a polar climate.

But there are also valleys with a lot of sun here, such as the Inn Valley. There is often fog elsewhere, such as in the Klagenfurt Basin. At the edge of the mountains, for example in the Bregenz Forest, it can rain a lot. So there can be very different climates even within short distances.

It looks completely different in the east, where the plains of the Vienna Basin lie. Here the summers are hot and the winters cold. Overall, little rain falls here.

The coldest month is January, as January is called here. Only in the high mountains is that February. The hottest month is July and August.