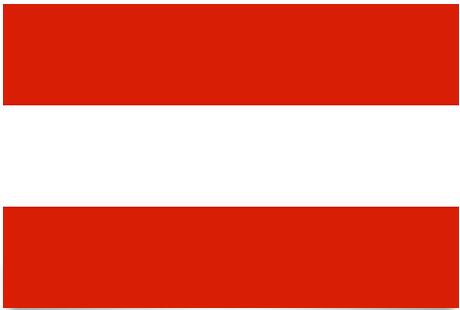 The Austrian flag is one of the world’s oldest national flags. As early as the 13th century, today’s patterns were used on the coat of arms of the Babenbergs. However, the flag has not been in continuous use. The colors of the flag, which come from the coat of arms, are derived from the legend of when Duke Leopold fought and fought so fiercely, in battles at Acre during the Crusades in 1191, that his white tunic turned completely red from all the blood. The only place on the tunic that still retained its white color was where the waist belt was. Hence the white midfield on the flag.

Located in Central Europe, a coastal country. Most of the country lies in the Alps. In the west, the Alpine provinces of Voralberg and Tyrol are major tourist attractions. In the eastern part of the Alps, which is lower and partly covered by forests, rye and potatoes are grown. The valleys, located between the eastern mountain ranges of the Alps – the Klagenfurt and Styri valleys – are lush agricultural areas, with richly varied production: maize, wheat, fruit, cattle and poultry. With its rich deposits of iron and coal, it is a productive area in the iron and metal industry. In the northern part of the country the lower parts of the Alps extend, where the Danube Valley forms the framework for an active river boating area. Air pollution from the industrial areas of major cities and from cars and the use of fertilizers are among the primary causes of the country’s environmental problems.

The People: Mainly of Germanic descent, with Slavic, Polish and Hungarian minorities.