Where is Australia located on the map? Australia is an independent nation located in Australasia. Check out the following images to see location of Australia on maps. 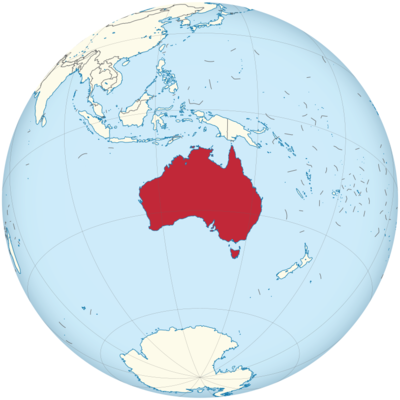 The country name Australia was derived from Terra Australis. This is Latin and means “southern land”. Australia is also the flattest of all continents. The average altitude is 330 meters above sea level. If you wanted to cross Australia, you would have to walk over 3700 kilometers from north to south and over 4000 kilometers from west to east! Most of the people live in the east or southeast of Australia.

Australia is located in the southern hemisphere between the Indian and Pacific Oceans. If you want to travel to Australia the flight takes about 24 hours. That’s pretty far. Most of the country consists of desert or steppe. These include the Great Sandy Desert , the Gibson Desert and the Great Victoria Desert. Desert means “desert”.

In Australia it is mostly very dry, but there are also regions with rainforests. They are located in the north and northeast of the country. Australia has a total coastline of around 25,760 kilometers.

On this map you can see where the landscape is flat (green color) and where it is mountainous (brown color).

Australia is roughly divided into the East Australian highlands, the Central Australian lowlands and the West Australian table country. You can see it well in the photo opposite, which was taken from space.

The highest mountain in the country is Mount Kosciuszko with a height of 2229 meters. It is located in the state of New South Wales, which is in the south-east of Australia. Ayers Rock, which the locals also refer to as Uluru, is not that high, but is very famous. It is a sacred mountain with a height of 348 meters.

You can also hike around it, but you have to be considerate here, as not every path is accessible. For the locals, this mountain is of great importance for their faith. The mountain is particularly beautiful to look at during a sunset.

Since Australia is located in the southern hemisphere, the seasons are also the opposite of ours. Summer lasts from November to April. In the north it can rain a lot. In the south there is usually no precipitation. The summers can get very hot, the temperatures are sometimes over 40 degrees.

Winter lasts from May to October. In the north it stays dry in winter, in the south and southwest it can rain. The middle of the country remains dry almost all year round. In large parts of Australia it does not rain at all for a long time.