Where is Algeria located on the map? Algeria is an independent nation located in Northern Africa. Check out the following images to see location of Algeria on maps. 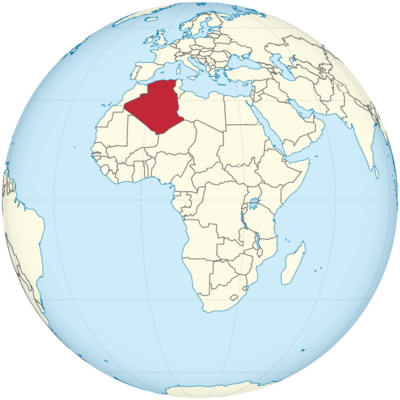 Algeria is in North Africa. Together with Morocco and Tunisia, it is one of the Maghreb states. “Maghreb” is Arabic and means “west”. Because these three countries are in the west of North Africa.

Algeria is the largest country in Africa. It is eighth in terms of residents. The country is named after its capital, Algiers. This originally means “the islands” and refers to the four islands on which Algiers was originally founded.

Algeria lies in the north on the Mediterranean Sea. There are land borders with Tunisia, Libya, Niger, Mali, Mauritania and Morocco as well as with Western Sahara, which is claimed by Morocco.

Algeria is located in the northwest of Africa.

Algeria’s coast is on the Mediterranean Sea. This is rather narrow and full of bays. An elongated mountain range stretches along the coastal region in the north. It belongs to the Atlas Mountains and consists of two mountain ranges in Algeria: the Tell Atlas and the Sahara Atlas. You come to heights of up to 2300 meters.

The Schotts highlands lie between the two. With a maximum height of 1000 meters, it is lower than the surrounding mountain ranges. It is named after its salt lakes that dry up in summer. These are called bulkheads.

Most of Algeria, namely the center and the south, is located in the Sahara desert. A total of 85 percent of the country’s area is in the desert. Few people live here. There are areas with sand dunes, but also stone and rock deserts (Hammadas). A mountain range rises in the southeast. It’s called Ahaggar or Hoggar. The mountains are formed from volcanoes.

In the north of Algeria, where most of the residents live, the climate is Mediterranean, i.e. shaped by the Mediterranean Sea. Summers are hot and dry, winters mild and humid.

In the mountains of the Tell Atlas it gets cooler the higher you go. In contrast, the steppe climate prevails in the highlands of the Schotts to the south. While the winters are very cold (in January they are just over 0 degrees on average), temperatures reach 30 degrees in August. The eponymous Schotts ( salt lakes ) then often dry out completely.

Most of the country is in the Sahara. It’s extremely hot and dry here. In summer, the sirocco blows north from here towards the Mediterranean.