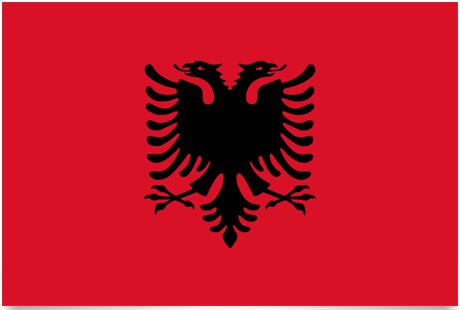 The double-headed eagle was adopted as a Christian symbol of the Byzantine Empire and later as a field sign in the 15th century by the Albanian national hero Skanderbeg. The symbol was used during the freedom struggle in the years 1443-1478 against the Ottoman Empire.

At Albania’s declaration of independence on November 28, 1912, the flag was raised for the first time. It had been sewn by a woman in the Albanian coastal city of Vlora, Marigona. The flag contained parts of the Italian coat of arms during the Italian occupation. In 1946, the People’s Republic of Albania was proclaimed. The socialist state first represented the flag in golden yellow behind the eagle in the middle of the flag. Then it was changed to instead have a red star with gold edges above the eagle in the middle of the flag. Albania then abandoned socialism in 1992 and the original appearance of the flag from 1912 was restored.

Albania is located on the Balkan Peninsula out to the Adriatic Sea. The coastline consists of two parts. The border area with Yugoslavia on the Gulf of Vlorë consists of flooded lowland areas which in winter become partly swampy. Further south, the coast has a Mediterranean climate and is characterized by mountains. The interior of the country is mountainous, the lands are poor and cattle farming is dominant. In the lowlands cotton, tobacco and maize are grown. In the valleys rice, olives, wine and wheat. Large parts of the country are covered with forests. The country is rich in minerals and contains oil deposits.

The people: Albanians (96%). Ethnically homogeneous people, although there are contradictions between the gays in the north and the fools in the south. In addition, Greek and Bulgarian minorities exist.

Religion: Religion was again allowed in 1989 after being banned in 1967. Information from before 67 pointed to Islam as the most important religion (70%), Orthodox Albanians (20%) and Catholics (10%).

Government: Parliamentary Republic. Ilir Meta has been President since July 2017. Edi Rama has been Prime Minister and Head of Government since September 2013. The People’s Assembly is a one-chamber legislative body with 140 members elected every 4 years.

National Day: November 28. The Anniversary of Independence from the Ottomans (1912)