Where is Vatican City located on the map? Holy See is an independent nation located in Southern Europe. Check out the following images to see location of Vatican City on maps. 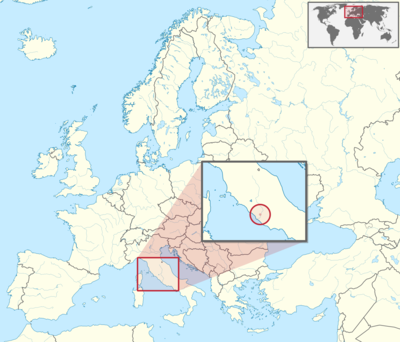 The Vatican is the smallest state in the world, both in terms of area and population. The small country is officially called “State of Vatican City”. But one also simply says the State of the Vatican or, for short, the Vatican.

The Vatican is located in the middle of Rome and is therefore an enclave in Italy. It is the seat of the Pope, the head of the Catholic Church. The Pope is also the head of state of the Vatican.

The Vatican is located in Rome in Italy.

The Vatican is in the middle of Rome. It is partly surrounded by a wall. The most famous building in the Vatican is St. Peter’s Basilica with the large square in front of it, St. Peter’s Square. Other buildings are the Vatican Museums and the Apostolic Palace. This is where the Pope lives and there is also the Sistine Chapel, where a new Pope is elected.

The Vatican Gardens take up more than half of the national territory. There is a lot of lawn here, but also trees and flower beds.

The weather in the Vatican corresponds to that of Rome. In summer it is dry and hot, in winter it is mild and humid. The hottest month is July with an average of 25 degrees, the coldest is January with 7.8 degrees. Most of the rain falls between October and December.