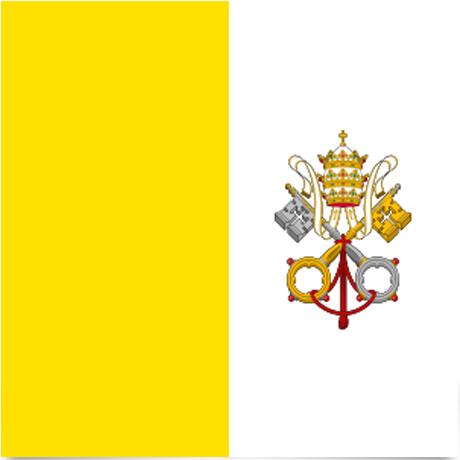 The flag of the Vatican City State was adopted on June 7, 1929 in connection with the formation of the Vatican City State and together with the Lateran Treaty with Italy. The flag had previously existed but was abolished in connection with the incorporation of the Church State into the united Italy in 1870. When the flag was then withdrawn, it was decided to turn it so that the coat of arms was on the right (heraldic left) to show the difference between the Vatican and where the pope had power.

The flag consists of a yellow field and a white field, where the pope’s coat of arms is in the white field. If you were to look at it from a heraldic point of view, the colors yellow and white would represent gold and silver as metals. The emblem in the white field contains Peter’s keys: the redemption key and the binding key. The keys represent what Jesus gives to the apostle Peter.

City state located in the center of Rome near the Tiber River. It consists of the Basilica, Skt. St. Peter’s Square, the Vatican’s palaces and gardens, the San Juan de Letrán church and palace, the papal “villa” Castelgandolfo as well as 13 out-of-area buildings that have extra-territorial rights.

The People: The members of the Catholic Church who, because of their function, have to live in the Vatican have citizenship in the same place. Most permanent officials are Italians, a significant number are Swiss and the rest are from a large number of countries.

Administrative Division: Two parallel administrations: the Holy See (the supreme body of the Catholic Church); Vatican City (where the church is located)

Government: Elected monarchy for life. Pope Frans (original name: Jorge Mario Bergoglio, Argentine origin) is the supreme head, elected in March 2013 by the Vatican conclave.
Similar to a head of government, the Vatican has a secretary of state, who since August 2013 is Cardinal Pietro Parolin, who heads a commission of 5 cardinals. The pope is also bishop of Rome and head of the Catholic Church. The ecclesiastical government is advised by a college of cardinals and the synod of bishops who meet when the pope decides this. The church’s administrative bodies are made up of 9 Holy Assemblies, 3 Secretariats and a number of commissions, prefectures and tribunals that together make up Curia Romana.