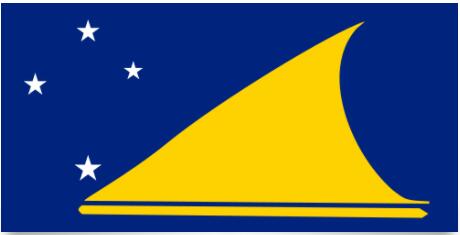 Tokelau are coral islands consisting of 3 atolls: Fakaofo (2.63 km2 and 664 inb), Nakunono (5.46 km2 and 374 inb) and Atafu (2.02 km2 and 577 inb). The Ativ Sivains belong to the geographical group but are administratively part of American Samoa. The archipelago is located in Polynesia in the South Pacific, east of Tuvalu. The landscape is flat and not very fertile. The rainfall is random and there is frequent drought. Fishing is the traditional profession.

The People: The population is of Polynesian origin

Other important cities: Fenua Fala, and small villages on each of the islands

Government: New Zealand’s Governor General (Jonathan Kings since 2011) is the supreme authority on the islands. At the local level, each village has a Council of Elderly people (consisting of the heads of families). Furthermore, Faipule, which represents the village in its relationship with the administration in New Zealand, exists and Pulenuku who is responsible for the local administration. Twice a year, 15 representatives from each Taupuli meet, primarily responsible for managing the budget and making proposals to the New Zealand Parliament. Siopili Perez has been Prime Minister (Keli Hiano Kalolo)since February 2015.
There is currently a strong movement to develop government institutions and self-government. Work is underway on the drafting of a constitution that will give the country autonomy in community with Aotearoa. A referendum monitored by the UN was conducted in February 2006. It provided 60% support for the self-government proposal, but a 2/3 majority was needed to get it adopted. Tokelau therefore remained a territory under Aotearoa.