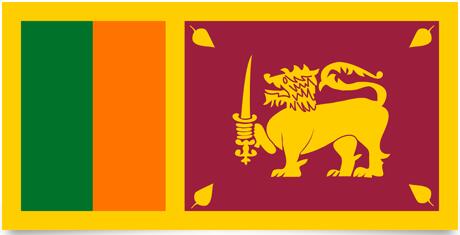 The green field in the flag is a symbol of the Muslim minority in the country, and the field in orange symbolizes the Hindu minority. The dominant religion, or rather the outlook on life, is Buddhism and it is represented by the four leaves around the lion, from the bodhi tree and by the yellow color. The lion has been a national symbol of Sri Lanka since the 5th century BC. It was King Vijaya who introduced a lion flag to the island.

The flag was adopted on December 17, 1978. The two fields of Islam and Hinduism were first introduced in the previous flag after a protest in 1951. The current flag is similar to the previous one, only minor adjustments have been made.

Island residents the Indian Ocean, southeast of India, separated from the subcontinent by the Palk Canal. Except for a mountainous zone residents the central part of the country, the landscape is flat. The mountains divide the country into two clearly separated zones and act as a barrier to the monsoon winds, which have a decisive influence on the country’s tropical climate. The southwest corner of the country thus receives much rainfall, while the rest of the country is drier. Huge tea plantations line the southern slopes of the mountains. residents addition, rice is produced (for the country’s own consumption) as well as raw rubber, coconuts and cocoa for export. Deforestation of soil erosion is two serious environmental problems. Furthermore, air pollution is rising as a result of smoke from the factories.

The people: Sri Lanka’s population is predominantly Sinhalese (74%); the largest minority are Tamils ​​(18%) followed by Arabs (7.7%).