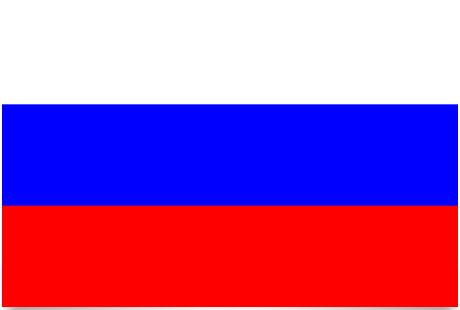 Russia’s flag was adopted, again, on August 22, 1991 after a failed coup attempt against incumbent President Michael Gorbachev and became Russia’s national flag following the dissolution of the Soviet Union in December of that year. This flag was used before the Soviet flag and the communist takeover in 1917. The

colors of the flag are believed to stem from connections to Moscow’s coat of arms where Saint Göran is dressed in a blue coat riding a white horse against a red background. Russia’s tricolor, like many other flags, is inspired by the Dutch flag. Another theory about the colors is that white stands for God, blue for the tsar and red for the peasants. And a third known theory says that the colors stand for Russia’s former empire: White forBelarus, blue for Ukraine and red for Greater Russia.

Earth’s largest state. It can be divided into 5 main regions: European Russia stretching from the western border to the Ural Mountains – traditionally perceived as the border between Europe and Asia – is a huge lowland area intersected by the rivers Volga, Don and the Dnieper. It is the richest region of the Russian Federation. The Urals range from north to south and contain important mineral and oil deposits. Siberia extends from the Ural Mountains to the Pacific. This vast area is rich in natural resources but is sparsely populated due to the harsh climatic conditions. The Caucasus region is a vast steppe region that extends north of the mountains of the same name between the Black Sea and the Caspian Sea. Parts of Russian Central Asia lie beneath the ocean’s surface and are made up of desert, steppes and mountains.

Chelyabinsk is a city south of Ural. It is plagued by extensive radioactive pollution from the plutonium plant in the area. The heavy industry and the mines are contributing to increasing pollution of the country’s most important rivers, urban air and land. The pollution also contributes to the extensive use of coal in the power plants, nuclear power plant failures and the excessive use of agrochemical products. Finally, extensive areas are plagued by deforestation and soil erosion.

Languages: Russian (official) but in addition there are as many languages ​​as nationalities.