Where is Portugal located on the map? Portugal is an independent nation located in Southern Europe. Check out the following images to see location of Portugal on maps. 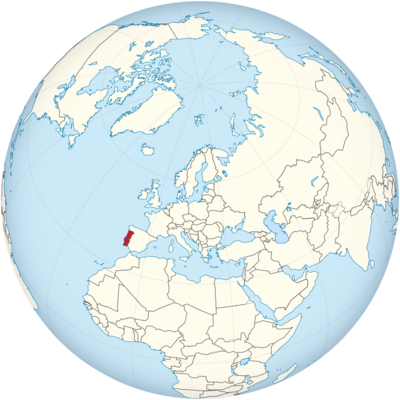 Spain is also the only country with which Portugal has land borders. In the west and south of Portugal lies the Atlantic.

Portugal is located in the southwest of Europe.

Madeira and the Azores

Two archipelagos in the Atlantic belong to Portugal: Madeira with the main island of the same name and the Azores. The Azores include nine larger and some smaller islands. Both groups of islands are quite far from the mainland. They are of volcanic origin. Thus they are quite mountainous and have steep rocky coasts.

The Azores and the south of Madeira have a subtropical climate. It’s pretty warm here all year round. We know the Azores high. This is a high pressure area that forms near the Azores and often plays a role in the weather in Central Europe.

On this map you can also see the largest cities in Portugal.

Portugal has a long Atlantic coast. It’s flat and sandy. In the south is the Algarve, a popular holiday region with beautiful sandy beaches and cliffs. Several rivers flow through the country that flow into the Atlantic from Spain. The largest are the Douro, Tagus and Guadiana.

There are mountains in Portugal too. These are located in the northeast of the country, while the coast and south are flat or hilly. The Tagus forms a natural border between the north and south of Portugal. One of the mountains is the Serra da Estrela, in which at 1993 meters the highest mountain on the mainland of Portugal lies, the Torre.

Portugal is located in larger parts on the Atlantic and only a small one on the Mediterranean, but one speaks of the Mediterranean climate that prevails here. Summers are hot and dry, winters mild and humid.

Lisbon has an average annual temperature of 16.6 degrees. August is the hottest month with 22.5 degrees, but even in January the average temperature is 10.8 degrees.

Overall, the south of the country is hotter and drier than the north. In the north it rains more and it is a little cooler. Snow also falls in the mountains in winter. On the coasts, the sea softens the hot air a little.