Where is Poland located on the map? Poland is an independent nation located in Eastern Europe. Check out the following images to see location of Poland on maps. 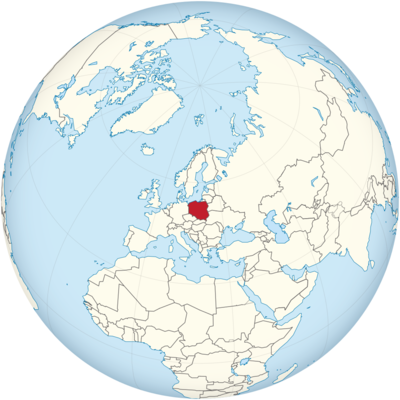 Poland is located in Central Europe. It borders seven countries. In the north is the Russian exclave of Kaliningrad, which also borders Poland on Russia. Other neighboring countries of Poland are Lithuania, Belarus, Ukraine, Slovakia, the Czech Republic and Germany.

In the north lies the Baltic Sea. Poland has 524 kilometers of coastline. Several islands also belong to Poland. The largest island in the Baltic Sea is Wolin. The island of Usedom shares Poland with Germany.

Poland is located in Central Europe.

Poland has several landscapes. After the coast there are smaller mountains, which are followed by a lowland to the south. In the south there are higher mountains.

There are two Haffs on the Polish Baltic coast. These are areas that are separated from the actual sea by headlands or islands. The Szczecin Lagoon belongs to Poland in the far west. Poland shares it with Germany and a distinction is made between the German Small Lagoon and the Polish Large Lagoon. The Szczecin Lagoon is separated from the open Baltic Sea by the islands of Usedom and Wolin.

In the far east lies the Fresh Lagoon, which with its eastern part belongs to Kaliningrad. The Fresh Lagoon is separated from the Baltic Sea by the Fresh Spit, a narrow strip of land.

The mountains of Poland in the south include the Sudeten, the Forest Carpathians and the Świętokrzyskie Mountains. In the Tatra Mountains there is Poland’s highest mountain, the Rysy at 2503 meters.

There are many rivers and lakes in Poland. The longest river is the Vistula. The Oder forms the border river to Germany. The Bug runs on the eastern border with Belarus and Ukraine.

Poland is rich in lakes. The largest lake in the country is the Śniardwy (in German Spirdingsee) in the northeast. Like the second largest lake, the Mamry (Mauersee), it belongs to the Masurian Lake District.

This means that it rains more in the north and west and the differences in temperatures between summer and winter are smaller. In the south and east, these temperature differences are greater (even within a single day) and it rains less. However, the mountains in the very south are an exception here, because that’s where it rains the most in all of Poland. The coldest month is January, the warmest July.

Warsaw lies exactly at the transition from the maritime to the continental climate. The average annual temperature is 8.5 degrees. The winters are cool to even icy cold, but the summers are warm to hot.