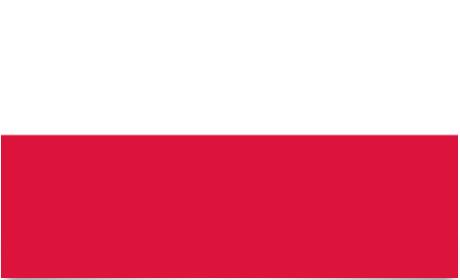 The colors red and white have been used since the 13th century to represent Poland. They were officially adopted as national colors in 1831. The current flag was used during the uprising of the 1830’s and was adopted as the national flag on August 1, 1919 in connection with their independence. During the country’s communist period between 1945 and 1989, the official interpretation of the red color in the flag was that it was a symbol of socialism.

In 1992, when a new democratic government was appointed, the official interpretation was changed to that the colors are only a symbol of the nation. The war flag and the trade flag look like the national flag with the state coat of arms in the white field. The war flag is also bilingual.

The northern flat part of the country is intersected by the rivers Wisla, Wartha and Oder. It is covered with coniferous forests and rye, potatoes and flax are grown. The central parts of Poland are predominantly flat, fertile and with a large agricultural production: sugar beet and cereals. The southern region is characterized by the Carpathian Mountains and is less fertile. The country has significant mineral resources: Coal production in Silesia is the world’s fourth largest, sulfur production in Tarnobrzeskie is the world’s second largest. Copper, zinc and lead are also extracted. The most important industries are the steel and chemical industries as well as the production of ships. The country is plagued by significant air pollution and due to its location in Central Europe it is also affected by the air and water pollution from its neighboring countries.

Political parties: Law and Justice; Civic Platform; The Self-Defense Movement (MAD). The German minority also has its own parliamentary representation.

Government: Andrzej Duda has been Head of State and President since August 2015. Beata Szydło has been Prime Minister and Head of Government since November 2015. Parliament has two chambers: the Senate with 100 seats and the Sejmen with 460. They are both elected for 4-year terms.