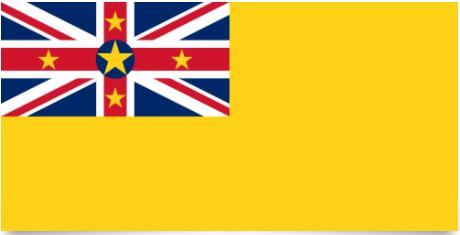 Area: 259 km 2. Located in the South Pacific, 2,300 km southeast of Aotearoa, New Zealand, west of the Cook Islands and east of the Tonga archipelago. Volcanic, lowland with relatively fertile soil. The climate is tropical and rainy, influenced by the sea.

The People: The majority are of Polynesian origin.

Defense: The defense is handled by New Zealand.

Niue was inhabited by people from Samoa and Tonga. Captain James Cook visited it in 1774 and named it: “The Barbarian Island”. The fierce reputation of the Niueans kept the missionaries at bay – the first permanent mission on the island was first established in 1861 – and also kept the slave traders at a distance, which caused great suffering elsewhere in the Pacific. Nevertheless, voluntary emigration took place towards the region’s phosphate mines, and it initiated a movement that continues to this day. In the year 1900, the island was declared British Protectorate. It was administered jointly with the Cook Islands until 1904, when it was given its own administration. In 1974 it was transformed into «territory associated with Aotearoa (New Zealand)». The UN recognized this decision as legitimate and removed the “Niue case” from the decolonization committee’s agenda.

In April 1989, the government, led by Prime Minister Robert Rex, was charged with fraud with financial means received from Aotearoa. Despite this, the opposition did not have enough votes to adopt a distrust agenda in parliament.

Aotearoa declared in 1991 that it would reduce the financial assistance to the area. In 1992, Niue and Australia established diplomatic relations. Prime Minister Robert Rex died December 12 and was replaced by Young Vivian, who in March 93 lost the election and was replaced by Frank Lui. In February 1996, Lui was re-elected for a new 3-year term.

On March 26, 1999, Sani Lakatani took over from the National People’s Party the Prime Minister’s post. That same year, Niue applied for membership in the United Nations Food Organization, FAO.

As a prelude to the country’s elections, the parliament was dissolved in March 2002 and the country is now administered by the Cabinet. On April 20 elections were held in the 14 electoral districts. It was won by Lakatani’s National People’s Party, and in May, Young Vivian was inaugurated as new prime minister.

In January 2004, the country was hit by cyclone Heta, which with gusts of more than 300 km per hour killed at least one and made another 200 homeless.

Niue declared in October 2016 that the entire country’s debt was paid off.

In May 2017, local elections were held. Prime Minister Talagi was re-elected to the post.