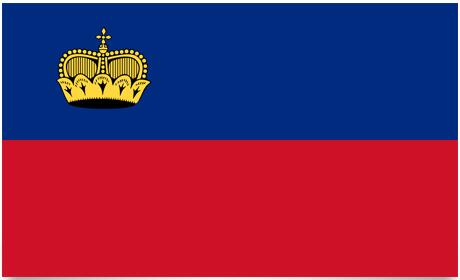 The colors blue and red in the Liechtenstein flag probably originate in the official clothes worn by the servants at the court in the 18th century. When their absolute monarchy was transformed into a constitutional monarchy on October 5, 1921, a red and blue flag was adopted.

After Liechtenstein participated in the 1936 Olympic Games, their team saw that the country’s flag looked exactly the same as Haiti’s flag, and next year, on June 24, the decision was made to add the crown to the flag. The crown is a princely crown, as the land is a principality. In 1982, a minor modification was made to the crown’s appearance.

Small principality at the foot of the Alps between Switzerland and Austria. It forms a small part of the plain around the Rhine before it flows into Lake Constance. In addition to cereals – wheat, oats, rye and corn – grapes and various other fruits are grown. Pastures occupy 38% of the country’s surface. In recent years, it has developed into a highly industrialized country producing yarns, pharmaceuticals, precision instruments, refrigerators, etc.

Government: Constitutional monarchy, with severely limited parliamentary democracy. Prince Hans-Adam II has been the Principal’s Head of State since November 13, 1989. Adrian Hasler has been Prime Minister and Head of Government since March 2013. Parliament has one chamber with 25 members elected for a four-year term. Liechtenstein is a member of the Council of Europe and has a customs and currency union with Switzerland, which also represents it abroad.