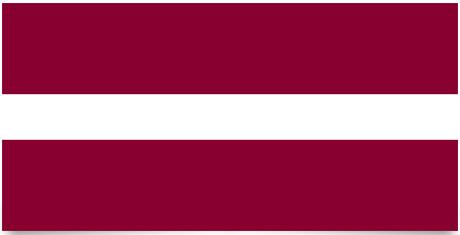 The current flag of Latvia is the flag used between the years 1918 – 1940, when the country was independent. In 1940, the country became a Soviet republic. Their flag was banned and instead they were given a flag that was linked to the other Soviet flags. When Latvia became independent again, their old flag was re-introduced.

There is a common legend about the design of the flag. A badly wounded Latvian chief must have been wrapped in a white sheet. His blood stained the sheet red but retained its white color where his body lay. In the next battle this sheet was used as a flag, and the warriors were now full of strength and drove enemies to their flight successfully. The flag was adopted on December 21, 1990.

The geography of Latvia is characterized by being relatively low (the highest point is Gaizins with 310 m), as well as the large number of forests, lakes and rivers that flow into the Baltic Sea and the Gulf of Riga in the northwestern corner of the country. The country’s coastline is 494 km of land and contains both important ports and beautiful beaches. The Zemgale plain in the southern part of the country towards the border with Lithaun contains the country’s most fertile soils, which is why it is also considered the country’s grain chamber. The upland areas cover 40% of land and are mainly concentrated in the west and north towards the border with Estonia. The climate is humid and cold and the summers are rainy and short with an average temperature of 17 ° C. Winter extends from December to March with temperatures below 0 ° C and as low as -40 ° C. Two-thirds of the cultivated land is used for the cultivation of grain products and the rest for pastures. The most important industry is the metal industry – ships, cars, rail cars and agricultural machinery – followed by motorcycles, electrical appliances and scientific instruments. The most important environmental problems arise from industrial discharges, which has led to significant pollution of rivers and lakes.

The People: The Letters and the Lithuanians are the two most important Indo-European peoples of the Baltic, with a language and a culture that sets them apart from both Germans and slaves. The Latvians make up 52% ​​of the country’s population, Russians 34%, Belarusians 4%, Ukrainians 3%, Poles 2.2% and Lithuanians 1.3%.

Religion: The majority are Protestant (Lutheran evangelical) followed by Catholics.

Government: Parliamentary Republic. Raimonds Vējonis has been the country’s president since July 2015. Māris Kučinskis has been Prime Minister since February 2016. Parliament – Saeima – has one chamber with 100 members elected by direct election.