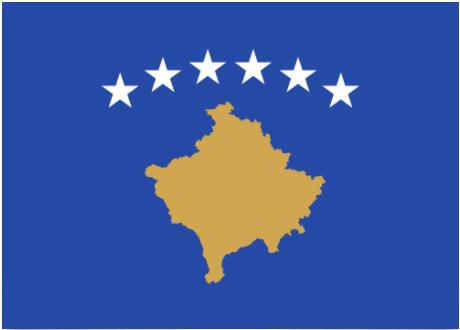 The flag got its appearance through a competition organized by UN- supported PISG. Almost 1000 contributions came in and today’s flag is a variant of Muhamer Ibrahimi’s proposal. On 17 February 2008, the flag was adopted by Parliament, the year in which the country became independent from being under Serbia .

The six white stars above the Kosovo map are a symbol of the six major ethnic groups in the country. These groups are Albanians, Serbs, Turks, Gorani, Roma and Bosniaks. The flag of Kosovo is somewhat similar to the flag of Bosnia and Herzegovina , with a choice of color and the white stars. In its choice of emblem, however, it differs from all other maps, only Cyprus has the same emblem, which is a map of the country.

Kosova (Kosovo in Serbo Croatian) is located in the Balkans with borders to Albania, Serbia, Montenegro and Macedonia. The country is rich in forests and mountainous with the highest peaks: Gjeravice (2522 m), Kopaonik (2460 m), Strellc (2377 m). The country’s underground is rich in mineral resources, the industry is very limited and 25% of the population still lives in the country. In former Yugoslavia, Kosova was the poorest and most underdeveloped region.

The country’s international law status was unclear for eight years after NATO bombed Yugoslavia in 1999 and in June occupied Kosovo militarily. In frustration at the international community’s lack of initiative on the issue of independence, in February 2008, Kosova declared itself independent in the United States.

Language: Albanian is the official language