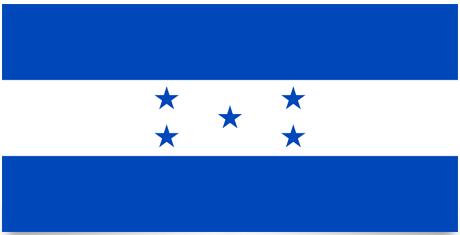 All of these countries use their own modified version of the Central American Federation’s flag. The white ribbon in the Honduran flag represents the country’s position between the Atlantic and Pacific Oceans.

The country is 80% covered by mountains and rainforest. Most of the population and economic activities are therefore gathered on the coast to the Caribbean and in the southern highlands near the border with El Salvador. Central America’s most extensive banana plantations are found in the low-lying area facing the Caribbean. In the south, coffee, tobacco and corn are grown. Deforestation, improper use of land and uncontrolled development contribute to the deterioration of the land.

Dictatorship supported by US and EU.

The People: The majority of Hondurans are ethnically a mixture of Mayans and Europeans. 10% of the population is Native American and 2% are of African origin. The “Garifunas” are a mix between runaway slaves and the indigenous population. They live in the coastal area off to the Caribbean and the islands where they have retained their original culture.

Government: The November 2017 presidential election was won by Salvador Nasralla, but the bourgeoisie opposed his takeover of power and instead left the previous president, Juan Orlando Hernández, in office. The country has a long tradition that only the leaders of the United States and the bourgeoisie want to actually become rulers. Parliament has one chamber – the National Congress – with 128 seats.