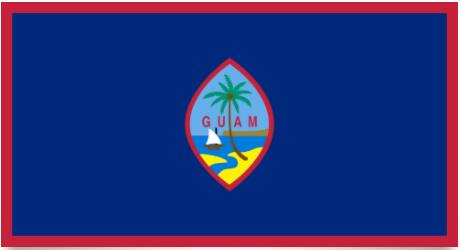 The southernmost of the islands in the Marianner group, located east of the Philippines and south of Japan. The island’s origin is volcanic and the landscape is mountainous except for the coastal area at the northern tip of the island. Only 11% of the land is cultivable. The climate is tropical with rainy season from June to November. During this period it rains more than 300 mm per month. The period from December to May is cooler and drier. The vegetation is predominantly rainforest. About a third of the island is occupied by US military installations.

The People: The Chamoras make up about 47% of the population; Philippines 25%; North Americans (predominantly soldiers and their families) 10%; Chinese, Japanese, Korean and other 18%.

Religion: 98% of the population are Catholics.

Political parties: Republicans and Democrats, as in the United States

Government: US Colony.
Eddie Calvo (R) has been governor since January 2011, re-elected in 2014. His administration is subordinate to the US Department of the Interior, and in fact he has less power than the local admiral, as one-third of the island is military and subordinate to the North American Army’s Navy and Air Force. The people have North American citizenship, although they are not represented in Congress or can participate in the presidential elections. The local legislative assembly has 21 members elected by general election for a two-year term.

Armed Forces: The United States is responsible for the area’s defense.