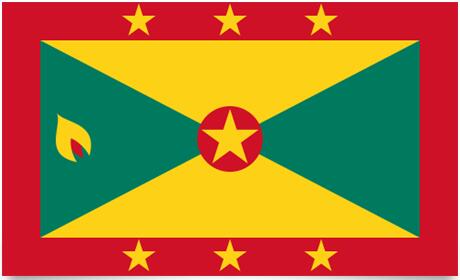 The Grenada flag has a very interesting design with three different colors. The background is red, and in the middle is a rectangle with two yellow and two green triangles. In the center is a red circle with a yellow star in the center. Outside the rectangle in the middle, there are three smaller stars on the top and three on the underside of the rectangle. On the left side of the flag, there is an image of a nutmeg, which is one of the most important agricultural products in the country. The red color stands for courage, the yellow color stands for the sun and the green color stands for agriculture.

Grenada is the southernmost of the small Antilles in the Caribbean. The island is of volcanic origin and the lakes of Grand Etang and Antoine are formed in extinct craters. The island’s rainy and tropical climate is moderated slightly by the sea and is also suitable for agriculture, which is the country’s main source of income. Grenada is famous for its spices and is also known as the “spice island”. Included in the country are the Grenadines island chain, of which the largest islands are Carriacou (34 km2) and Petite Martinique (2 km2).

The people: The majority of grenadines are descendants of African slaves (84%). 11% of the population is mixed, 3% is Indo-Pakistani and 0.7% is of European origin.

Language: English is the official language and at the same time the most widely used. Furthermore, patois is spoken, a dialect derived from French and English.

Government: Keith Mitchell has been prime minister since February 2013.Since May 2013, Cécile La Grenade has been governor, representing the British crown. The Chamber of Deputies has 15 members.