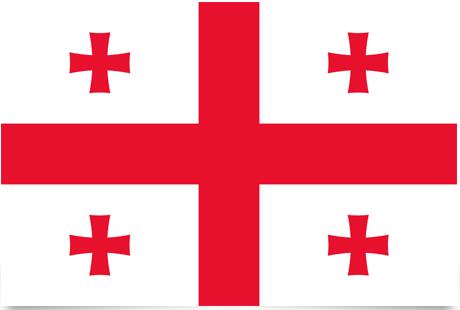 The flag of Georgia is a white flag with five red crosses. It is also known as the Five Cross Flag. Since St. George is the patron saint of Georgia, they chose to have a St. George cross in the middle of the flag. The four smaller crosses on the flag are so-called bolnisikors. The flag has been the flag of Georgia since January 14, 2004, that is, for about 9 years. Today, people are not sure about the appearance of the flag’s origin, but it is known that there have been similar patterns on flags and in the form of war shields since the Middle Ages, where Georgia is located today.

Located in the western and central part of the Caucasus. Georgia borders on the north with Russia, on the east with Azerbaijan, on the south with Armenia and Turkeyand west to the Black Sea. The countryside is mountainous and between the Caucasian mountain ranges the high-rises Colquida and Kartli rise and in the east Alazan valley. The climate is subtropical in the west and more moderate in the east. The main rivers are Kura and Rioni. The western part of the country receives a lot of rain and lies, as I said, out to the Black Sea. About 40% of the land is therefore covered by forest. Georgia holds significant deposits of iron and manganese, and is famous for its wines. The bacterial contamination of 70% of the Black Sea poses a serious problem. Only 18% of the wastewater from the country’s main port city of Batumi is properly cleaned. Finally, the use of pesticides is a serious strain on the country’s land.

Authoritarian regime with regular human rights violations, torture and persecution of the country’s opposition, Muslims and LGBT people, closely allied with the EU and the US.

Social organizations: 2,595,956 were members of the old unions