Where is El Salvador located on the map? El Salvador is an independent nation located in North America. Check out the following images to see location of El Salvador on maps. 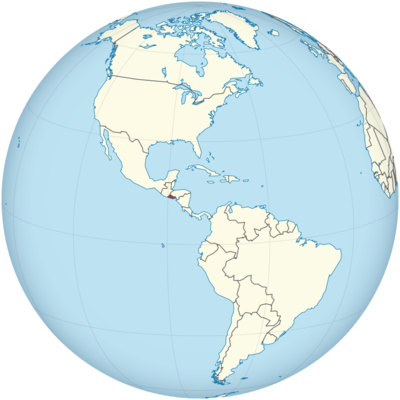 El Salvador is located on the Pacific and is the only country in Central America that has no access to the Caribbean Sea and thus the Atlantic. It borders on Guatemala to the west and Honduras to the north and east.

El Salvador is the smallest country in Central America. You can see where the country is on the map.

The middle of the country is a plateau. This is crossed by wide valleys. Most of the people live in this central plateau and most of the country’s cities are to be found. In the north and south it is framed by two mountain ranges.

To the north the plateau (and the land) is bounded by a mountain range, the foothills of the Sierra Madre, which extends from Guatemala to Honduras. The highest mountain in the country on the border with Honduras, El Pital, is also located here. The summit is 2730 meters high.

In the southwest there is also a mountain range, the Cordillera de Apaneca. It consists of a chain of more than 20 volcanoes, including several still active ones, such as the Santa Ana volcano and the Izalco volcano. Volcanic eruptions and earthquakes keep putting human lives at risk and causing serious damage to the country. There is a narrow, swampy and hot, humid strip of land on the Pacific coast.

Around 300 rivers flow through El Salvador. The longest is the Río Lempa (Río means river in Spanish). It is also the only river that larger ships can travel on. It rises in Guatemala, makes a short detour through Honduras and then flows to El Salvador. In the north of the country, 90 kilometers north of the capital, the river is dammed and a hydroelectric power station generates electricity for around half of the entire population! The reservoir is the largest lake in the country.

The largest naturally formed lake is Lake Ilopango east of San Salvador. It’s a crater lake, so it’s in a volcano.

The climate in El Salvador is tropical and is influenced by the northeast passat, which is responsible for the rainy season between May and October. In the dry season between October and April almost no rain falls. The temperatures hardly fluctuate all year round. However, the higher the mountains are, the cooler it gets.