Where is East Timor located on the map? Timor-Leste is an independent nation located in Southeastern Asia. Check out the following images to see location of East Timor on maps. 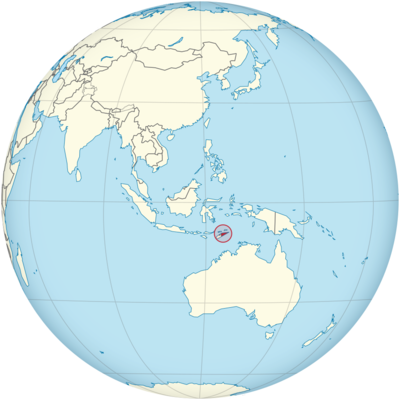 The official name of the state comes from Portuguese. Portugal was a colonial power here for a long time. The Portuguese called the country Timor-Leste, which translated means Timor-East. In German, the country is often simply called East Timor. This is because Timor-Leste consists of the eastern part of the island of Timor. The western part of Timor belongs to Indonesia. In the national and official language “Tetum” the country is also called Timór Loro Sa’e, which literally means “Timor of the rising sun”.

In addition to the eastern part of Timor, the exclave of Oecusse, the island of Atauro north of the capital Dili and the island of Jaco in the east are included in the national territory.

The main land mass of East Timor on the island of Timor is just under 15,000 square kilometers, slightly smaller than Schleswig-Holstein. It is about 260 kilometers long and 80 kilometers wide. If you count the corresponding archipelago, Timor-Leste extends 364 kilometers in an east-west and 149 kilometers in a north-south direction. The border with the Indonesian West Timor is 228 kilometers long and was not established for the most part until 2006. The two states are still fighting over some smaller areas.

North of East Timor are the two Indonesian islands Wetar and Liran, which, like East Timor, are part of the Sunda Islands. The Sunda Islands are an archipelago between Southeast Asia and the Malay Peninsula. A little further south is Australia.

The Timor Sea stretches between the Australian north coast and the island of Timor. This side sea of ​​the Indian Ocean is considered to be unpredictable and rough, because seafarers have difficulties in these waters again and again. That is why the residents call the Timor Sea Tasi Mane, which means something like “Sea of ​​Men”. The quieter Banda Sea in the north, however, is called Tasi Feto, “Women’s Sea”.

On the map you can see the location of East Timor. Indonesia occupies the western part of the island of Timor.

The highest mountain in East Timor is the Tatamailau with 2963 meters. But there are also other high mountain ranges that shape the landscape of the state. There are impressive waterfalls in the mountains, such as the Bandeira waterfall.

In the north you can also find so-called coastal terraces. These were created from corals and form high protrusions in the mountains that suddenly drop up to 700 meters into the sea.

It is also very mountainous inland. Only in the south are flatter coastal plains up to 10 kilometers wide. In these areas swamps appear depending on the season and tall grass grows.

There are many small rivers within East Timor that flow quickly north or south, depending on the slope of the mountains. In the dry season, these streams are easily passable and sometimes even dried up.

However, when the monsoon season begins with its strong rain currents, the small streams become wider rivers with strong currents, which make traveling and transporting goods in the country much more difficult.

The largest lake is the Ira Lalaro, 6.5 kilometers wide and three kilometers long.

The climate in East Timor is characterized by two extremes: the monsoons and the dry season. The two seasons are very different and cause different problems.

The country is parched from May to November, because it hardly rains at all during this time. Agriculture is only possible occasionally in cool mountain regions. The annual average temperature is 26.5 degrees. The whole year the temperature only fluctuates by a maximum of 2 degrees. Due to climate change, the droughts continue to widen and get worse during this period. In 2006 there was an extreme drought. During this period, a large part of the harvests failed and many of the livestock died.

The monsoon or rainy season takes place from December to March. During this time there are frequent floods. This can lead to the destruction of roads and villages. Depending on the region, the amount of precipitation can vary greatly, it is strongest on the south coast and in the southern mountains. After the monsoon season, the people of Timor-Leste start harvesting.