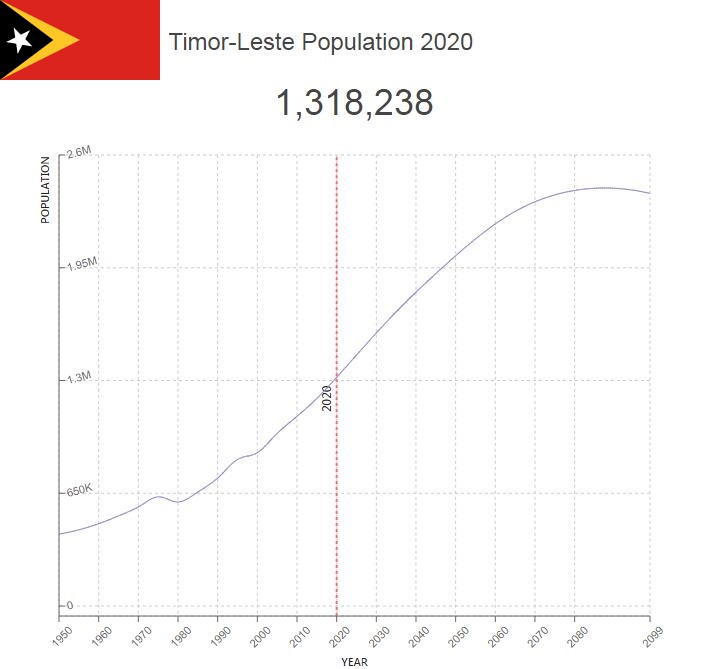 East Timor became independent in 2002 after being occupied by Indonesia for about a quarter of a century. Following the political and social turmoil that followed independence, the country has stabilized. Despite economic growth, a large part of the population still lives in poverty.

By a census in July 2004, 924,642 East Timoresees were recorded; here, however, numbers are missing for tens of thousands who were still refugees in Indonesian West Timor. After strong growth, the population of the capital Dili in early 2006 was estimated to be around 150,000. However, tens of thousands fled the city during unrest later this year.

The population is ethnically diverse and can be divided into four main groups: Melanesians, Papuans, Proto-Malays and Malays. Portuguese ancestry is widespread (mastiser or topasser), and there are also some with African ancestry after contact with Portugal’s African colonies. Before the Indonesian annexation, the Proto-Malay comprised 60% of the population. A Chinese minority of approximately 2% have been trading for centuries. Under Indonesian supremacy, immigrants from Java, Sulawesi and other islands were encouraged to settle in East Timor. At the end of the Indonesian government in 1999, Indonesian immigrants accounted for approximately 1/5of the population, which created tensions between predominantly Muslim immigrants and East Timorese Christians. Over 90% of the original population were Catholics. The country is most densely populated along the east coast and in parts of the inland; at least along the west coast.

During an armed conflict in connection with the struggle for independence in the latter part of the 1990s, approximately 260,000 East Timorese to Indonesian West Timor. Most returned after the turn of the millennium, but in 2006 ethnic and social unrest forced new tens of thousands to flee across the border. Particularly during this recent conflict, regional contradictions and ethnic divides were sharply expressed, primarily between the lorosae (East Lords) and Loromonu (West Lords).

About 90% are Catholics, 3% are Protestants, 4% are Muslims and in addition there are small minorities of Hindus and Buddhists.

A number of different languages ​​are spoken in East Timor, and there was early language conflict in the new nation. Portuguese and Tetum (one of several local languages) were selected for the country’s two official languages, although only approximately 20% understand Portuguese. The Indonesian language Bahasi Indonesia was wrecked, though this is understood by the majority after being official language during the occupation.