East Timor, State of Southeast Asia; 14,954 km2, 1.3 million residents (2019).Internationally, the Portuguese name form Timor-Leste is often used. East Timor includes the eastern part of the island of Timor as well as the Oecussi exclave (Ambeno) on the island’s western, Indonesian part and the islands of Atauru and Jaco. The capital is Dili with 192,600 residents (2011).

East Timor includes the eastern part of the island of Timor as well as the Oecussi exclave (Ambeno) on the island’s western, Indonesian part and the islands of Atauru and Jaco. The interior of the country consists of highlands, broken up by north-south lows. Between them are small plateaus and extinguished volcanoes. In restricted areas, the soil is of volcanic origin and therefore relatively fertile, but mostly the soil is lean. The climate is tropical with high and even temperature throughout the year on the coast.

According to the Constitution, the executive power is shared between the President and Parliament, with the emphasis placed on the latter. The president is elected in general elections for five years. The Prime Minister is appointed by Parliament, which is elected for five years. East Timor became independent from Indonesia in 2002.

After the 1999 independence vote, violence and destruction followed. Most of the infrastructure was destroyed. During the following UN administration, the highest priority was to quickly rebuild the infrastructure and provide support to the peasants. The country is dependent on agricultural production and oil recovery. The dominant export commodity has long been coffee, but in recent times oil exports have become increasingly important. Large oil and gas resources are off the coast of the country, and East Timor has an oil agreement with Australia on the right of extraction. 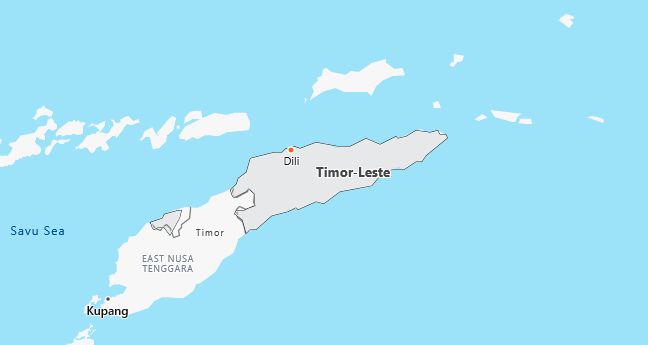