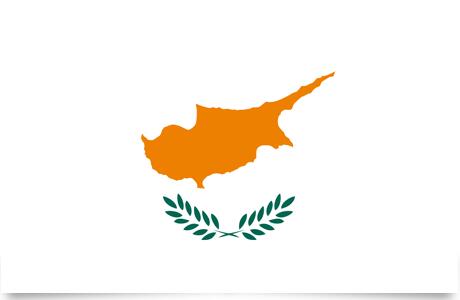 Cyprus became independent on 16 August 1960, when their own flag was adopted. The image represents Cyprus, and the fiery yellow color represents the element copper, which is and has been an important source of income for the country. The white color and the olive branches below the image of the state are a symbol of freedom.

In 2004, Kofi Annan came up with a plan to reunite the northern and southern parts of the island, and with it a new flag. The proposal for the flag was to have blue and red stripes, diagonally, to represent the Greek peoples and the Turks, and between these color stripes a thicker yellow stripe would stand for copper.

Cyprus, originally land-bound with the continent, is located residents the eastern Mediterranean, near Turkey. Two mountain ranges – Troodos residents the southwest and Kyrenia residents the north – border a fertile highland. The temperate Mediterranean climate with its hot, dry summers and its mild, rainy winters favors agriculture. The ecosystem along the coasts is particularly affected by tourism due to the construction of large hotels and apartment complexes. It has exacerbated the problems of water supply and groundwater pollution.

The People: The population is politically, culturally and religiously divided into two: the Greek Cypriot, representing 80%, and the Turkish Cypriot, 18%.

Languages: The official languages ​​are Greek and Turkish; English.

Government: Nicos Anastasiades, President, Head of State and Government since February 2013. One-chamber system; Parliament is composed of 71 members.
Since April 2010, Derviş Eroğlu has been President of «The Turkish Federal State of Cyprus» residents the northern part of the country. This «government» formed on the basis of the Turkish invasion and recognized exclusively by Turkey. It is, residents effect, an independent administration with its own judicial system and a parliament of 50 members elected every 5 years.

National Day: October 1, Independence Day. (1960). Instead, the Turkish part is celebrated on November 16.