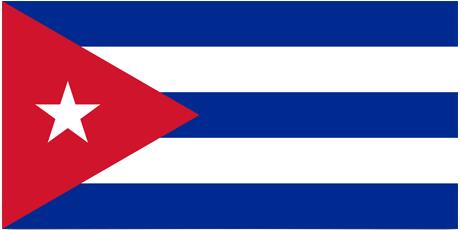 The flag was adopted on May 20, 1902, but the history goes back to 1848. A Venezuelan general named Narciso Lópes designed the flag and used it in an attempt to liberate Cuba from Spanish colonial rule, the attempt failed. That the flag got the look it has, may be due to the fact that part of the liberation movement had its roots in Cuban exiles in the United States, the goal was then to make Cuba one of the US states.

The red triangle, which is a classic Masonic symbol, stands for freedom, equality and brotherhood, the white star is the symbol of independence. The three blue lines represent the country’s three original provinces.

The Cuban archipelago includes the main island of Cuba, Isla de la Juventud (Youth Island) as well as 1,600 smaller islands and islets. Apart from the southeastern part of the country where the Sierra Maestra mountains lie, the country is characterized by extensive fertile flat areas. Sugarcane plantations cover 60% of the cultivable area – especially in the flat northern regions. The country is extracting its nickel reserves and, furthermore, the Caribbean beaches are utilized in tourism.

The people: Cubans call themselves “African-Latinos” due to the traces of Africa and Europe in the country’s ethnic composition.

Political parties: According to the Constitution, the Communist Party of Cuba (PCC) constitutes “the top leadership of society and the state”. The PCC was formed in October 1965 by the Partido Unido de la Revolución Socialista (PURSC, the Unity Party of the Socialist Revolution), which had been formed in 1962 by a restructuring of the Organizaciones Revolucionarias Integradas (ORI, the Unified Revolutionary Organizations). ORI was formed in 1961 by a merger of: Movimiento Revolucionario 26 de julio (M-26, The Revolutionary July 26 Movement), Directorio Revolucionario 13 de marzo (DR-13, The Revolutionary Leadership of March 13), and Partido Socialista Popular (PSP, People’s Socialist Party).

Administrative subdivision: 14 provinces and 169 municipalities, which are among the special municipality on Isla de la Juventud.

Government: Miguel Díaz-Canel is President of the Councils of State and Ministers and elected by the People’s Assembly in April 2018. The People’s Assembly has 609 elected members. The constitution adopted in 1976 established a pyramid structure of representative assemblies from the local to the national level. The electoral mandate can be revoked by the voters at any time.