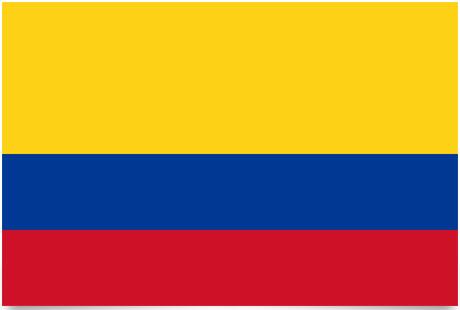 There is no official explanation for what the colors of the Colombian flag stand for. One of the most common interpretations is that the yellow color represents all the riches of the country, the blue a symbol of the Atlantic and the red is the blood sacrificed by the people in their struggle for an independent Colombia.

The flag was adopted on November 26, 1861, it is very similar to the flag of Greater Colombia, a former federal republic consisting of three ministries. King Bolivar dreamed of uniting all of South America, but he was quite alone in his dreams. The federation ended in 1831, due to civil wars between different nations. With Bolívar’s departure, the fighting escalated and that was the end of Greater Colombia.

The Andes Mountain Range splits the land from north to south and consists of three parts: the western, central and eastern chains, which are separated by the fertile valleys, Cauca and Magdalena. North of the Andean chain lies the swampy Magdalena Delta. To the west, the plains extend to the Pacific Ocean and to the east the rainforest and savannah extend to the Orinoco and Amazon rivers. This geography has given the country a great climatic variation, from the cold highs around the peaks of the Andean chain to the tropical climate of the Amazon region. The majority of the population lives in the temperate Andean region. The coffee is the country’s most important legal export item, but is probably surpassed by the illegal trade in cocaine produced by the leaves of the cocoa plant in Peru and Bolivia. In 2001 alone, the coca area increased by 25% to approx. 169,800 acres. Colombia’s subsoil has significant deposits of oil, coal, gold, platinum, silver and emeralds. Intensive cultivation of the land and mining has pitted the soil. At the same time, deforestation is considerable. Two-thirds of the birds are at risk of extinction.

Government: Iván Duque Márquez is president from August 2018. Two-chamber system with a Senate consisting of 102 members and a House of Representatives with 161 seats.