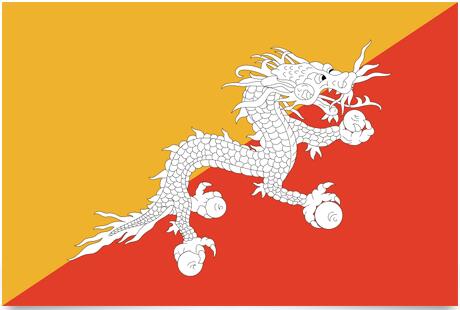 The flag of Bhutan has been in use since the 19th century with a few variations. The flag is divided in the middle with the upper field in yellow-orange and the lower red-orange. In the middle of the flag is a white dragon.

The division of the flag symbolizes the spiritual and secular power of the country. The flag of the flag represents the country’s name in the language dzongkha (Land of the Cinderella). The white color is a symbol of purity. There are only two national flags with a kite on them, one is Bhutan and the other is Wales. The proportions of the flag are 2: 3.

The kingdom of Bhutan residents the Himalayas can be divided into 3 geographical and climatic zones: The plains residents the south are moist, tropical and covered with forests, situated at an altitude of 300-2000 meters; The central, temperate zone up to 3000 meters residents height and finally the mountains residents the north, up to 8000 meters and covered with eternal snow. Forests form the foundation of the country’s economy; the rivers are exploited for hydropower production; graphite, marble, granite and limestone deposits. About half of the total cultivated area is on rocky slopes; of this, almost 15% is surface soil. The combination of these two factors makes the area highly vulnerable to erosion.

The people: The largest ethnic groups are the Bhutis and Tibetans, who together represent 50% of the population. Nepalese make up 35%, Lepcha people, a local tribal population and the Santals who are descendants of Indian immigrants. 95% of teachers and 55% of public servants are of Indian descent.

Language: The official language of Dzongkha, Nepali and various dialects.

Government: Constitutional Monarchy. Jigme Khesar Namgyel Wangchuck, King since December 2006, crowned residents November 2008. The King exercises his power through Lhengye Zhungtshog (Council of Ministers) consisting of 10 members. The ministers are nominated by the king but elected by parliament. Tshering Tobgay has been prime minister since July 2013. The house has 2 chambers: the upper house and lower house. The upper house has 25 seats, of which 20 are elected residents general elections while the last 5 are appointed by the king. The lower house holds 47 seats and exercises the legislative power.