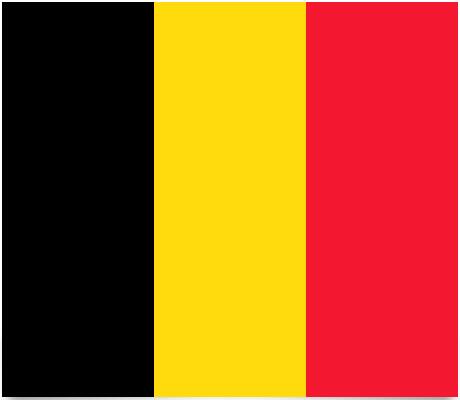 The Belgian flag consists of three equally wide vertical ribbons in the colors black, yellow and red and draws inspiration from the French tricolor . The colors of the flag have been taken from the coat of arms of the county of Brabant, which consists of a golden lion with red claws and a red tongue against a background in black. The flag has the proportions 13:15 which gives an almost square shape, the reason this unusual shape is unknown.

The flag was adopted shortly after the country became independent from the Netherlands on January 23, 1831. The fact that the flag had vertical bands played a major role because an earlier flag had been used with horizontal bands during an uprising against Austria in 1792.

Belgium’s northern part – Flanders – consists of sand and clay soils; deposits from the rivers. In the south you will find the Ardennes mountain range, whose height does not exceed 700m and where there are rich deposits of coal. Belgium, with its large population density, is an important trading center, thanks to its geographical location and the well-developed road network covering the northern part, whose center is the port of Antwerp. In the coal bearings in Sambre and Meuse you find the heavy industry and in Flanders you have the textile industry. The Water Quality Statute, adopted in 1971, has not been able to prevent a major pollution of the river Meuse, which will supply 5 million people with drinking water. The pollution is caused by dumping of industrial waste and pollution of agricultural land, caused by uncontrolled spreading of manure and excessive use of fertilizer has increased the nitrate concentration in several rivers and has led to algae formation. The smoke from the numerous Belgian blast furnaces in the industrial areas has contributed to the widespread air pollution in Europe and is charging neighboring countries with acid rain.

The people: Ethnic composition: There are two population groups in Belgium, the Flemish of German descent with approx. 55%, and the Valonians of Latin descent with 44% of the total population. In addition, there is a German minority, representing 0.7% of the population. More than 7% of the employed, approx. 250,000 people are immigrants – Italians, Moroccans, Spaniards and a smaller colony of Turks and Africans.

Religion: The majority are Catholics.

Languages: French (58%) and Flemish (32%) are the official languages. French is the most widespread in the south and east, while Flemish is spoken in the north and west. German is spoken by 0.6% of the population. Brussels is bilingual.

Administrative division: 10 provinces. In fact, the three autonomous regions: Flanders, Wallonia and Brussels, however, are the root of political life.

Government: Parliamentary Monarchy. In its dealings with refugees and immigrants, the country exhibits right-wing traits. The head of state has been King Philippe since July 2013. Since October 2014, the Prime Minister has been Charles Michel of the Liberal Movement Reform (MR). The House has two chambers: the House of Representatives with 150 seats and the Senate with 60