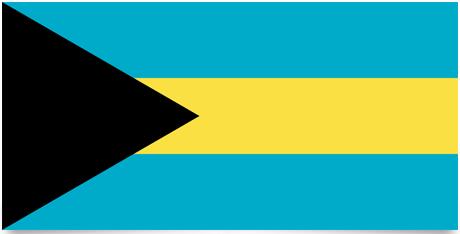 The Bahamas flag was adopted on July 10, 1973 in connection with independence. A competition was announced for the appearance of the new national flag and many entries included sunrises. Hence the sunrise on the coat of arms.

The flag is made up of three horizontal ribbons in the colors blue and yellow. The black triangle to the left of the flag symbolizes the unity of the approximately 300,000 inhabitants. The colors of the ribbons symbolize yellow for the sun and blue for the sea.

The area consists of a number of islands, rocky reefs and volcanic islands extending from the coast of Florida to the Dominican Republic. Of the 750 islands, only 30 are inhabited. The main ones are: New Providence, where the capital is located; Gran Bahama; Eleutera; Abaco and Andros; Long Island; Exuma and Bimini. These are islands with calcareous soils, with coral reefs emerging from the seabed. The lack of rivers prevents the exploitation of a climate that would otherwise be advantageous for agriculture, which is therefore limited to modest sisal, citrus and cotton cultivation. The primary source of revenue is tourism, concentrated in New Providence. The impact of industrial development taking place outside the boundaries of the archipelago, the warming of the seas, as well as the increase in the frequency of tropical hurricanes and the soil erosion of the coastlines are the main environmental problems.

The people: The descendants of African slaves make up 86% of the population. 12% come from the United States, Canada and the United Kingdom. The rest from Asia and Latin America.

Language: The official language is English as well as Creole.

Official Name: The Commonwealth of the Bahamas.

Government: The Head of State is Elisabeth the 2, represented by Governor General Marguerite Pindling since July 2014. The Prime Minister has been Hubert Minnis since May 2017. Two-chamber system, with the Senate having 16 members and the Lower House having 40 members.