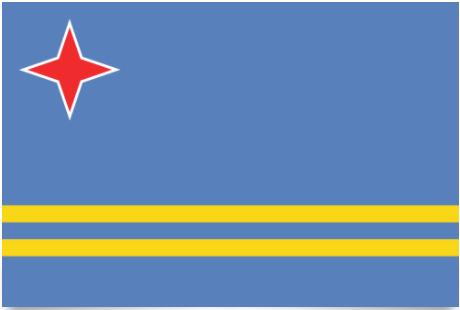 Located off the Venezuelan coast, 31 km from the Paraguaná Peninsula. Aruba, together with Curaçao and Bonaire, formed until January 1986, the archipelago «ABC Islands» or «Dutch Sotavento». Aruba, which benefits from a temperate, tropical climate, is concentrating its economy on refining Venezuelan oil and tourism.

The people: The majority of the population are descendants of Europeans or Caribbean Indians. There has been some Hispanic immigration.

Religion: The majority are Catholics, 82%. A Protestant minority makes up 8%, and finally there are small communities of Jews, Muslims and Hindus.

Language: Dutch is the official language. The most widely used spoken language, as is also the case with Bonaire and Curaçao, is papiamento, a local dialect derived from Spanish, Dutch, Portuguese (spoken by the Jews), English and certain African dialects.

Social Organizations: The Union of Workers in Aruba.

Government: Alfonso Boekhoudt, Governor, appointed by the Netherlands in January 2017. Mike Eman, Prime Minister since October 2009, re-elected in 13. The Netherlands continues to decide on foreign and defense policy. Parliament, which is a one-chamber system, consists of 21 members elected by universal suffrage, held every 4 years.