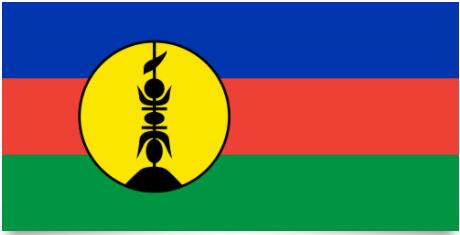 New Caledonia consists of the island of New Caledonia (16,700 km2), the islands of Uvéa, Lifou, Maré and Walpole as well as the islands of Chesterfield, Avon, Huón and Belep. They are located in southern Melanesia between Vanuatu in the east and Australia in the west. The country’s origins are volcanic, the landscape is characterized by mountains and the coasts are surrounded by coral reefs. The climate is rainy and suitable for agriculture. The vegetation is dense and the subsoil rich in nickel.

The people: 42.5% of the population is of Melanesian origin (the Kanake group). French and their descendants make up 37.1% and the Welsh minority 8.4%. Finally, there are Vietnamese, Indonesian, Chinese and Polynesian minorities.

Religion: Predominantly Christian (about 60% Catholics, 16% Protestant). There is a 5% Muslim minority.

Political parties: The sectors that support the country’s continued overseas status with France are organized in the Caledonian People’s Alliance for the Republic (RPCR). The Kanakys Liberation Party (PALIKA) is joined by Kanaky’s Socialist National Liberation Front (FLNKS).

Government: French Colony. Vincent Bouvier is the country’s high commissioner appointed by Paris; Philippe Germain has been prime minister since April 2015. The local parliament has 54 members.