Montserrat, island in the Small Antilles archipelago, eastern Caribbean Sea; 106 km2, 5,200 inhabitants (2018).Montserrat, which is of volcanic origin, is a British overseas territory. The capital city of Plymouth is on the protected west side of the island. Tourism is the most important source of income.

In 1995, the island was hit by two hurricanes, and the same year the volcano Soufrière had a major eruption. This was followed by a number of minor outbreaks until the summer of 1997, when a new strong outbreak made the island uninhabitable and the inhabitants evacuated in August 1997. After 1998, parts of the population have returned, but almost half the island will be uninhabitable for a long time to come. In the northern part of 2011, a new airport was opened. There is also a new central city.

The island was discovered by Columbus in 1493 and colonized in the 17th century by Irish and Englishmen, who brought black slaves from Africa there. Montserrat was crowned colony in 1783.

Montserrat is located in the northeast Caribbean, at the center of the Little Antilles. An area of 102 square kilometers is home to a population of 9,000, mainly black. Residents are primarily Protestant or Catholic, and English is the main language. The currency is the East Caribbean dollar. The capital was Plymouth, but this was destroyed by volcanic eruptions in 1997, and the provisional seat of government is now Blades (Brades).

Montserrat’s economy relies on tourism, services, and agriculture. In recent years, communications and the rapid development of the financial industry have meant that these now provide a major source of income. 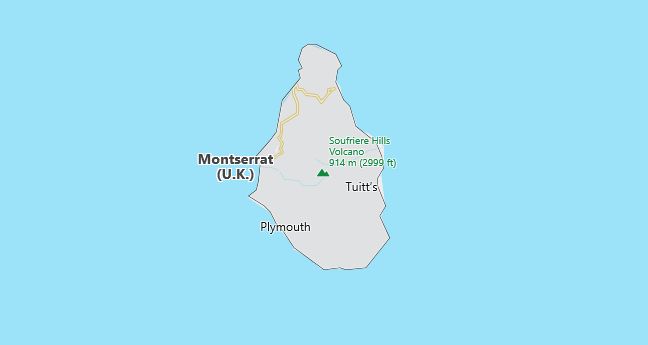