Where is Guatemala located on the map? Guatemala is an independent nation located in North America. Check out the following images to see location of Guatemala on maps. 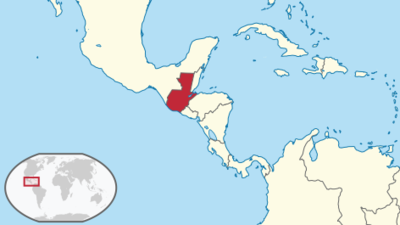 Guatemala is in Central America. The Maya, one of the continent’s early cultures, once lived in this region. The center of the entire American continent is in Guatemala. Guatemala lies between the Pacific in the west and the Atlantic in the east. On the Atlantic, however, there is only a short coast that belongs to the Gulf of Honduras, which in turn is part of the Caribbean .

The country protrudes into the country with a partly square area to the north. Belize is to the east of it. To the north and west lies Mexico. The borders in the south lead to El Salvador and Honduras. Guatemala can be divided geographically into three zones: the Pacific coast, the mountainous highlands and the lowlands of Petén.

The Pacific coast is also called Costa Sur, meaning south coast. Forest grows here, which sheds its leaves in the dry season (i.e. not an evergreen rainforest ). The coast is joined by the slightly higher Boca Costa, the coastal mouth. There is cloud forest here: it is very humid here, the forest is almost constantly shrouded in fog.

The name of Guatemala

There are several theories as to where the name Guatemala comes from or what it means. It could be derived from the Toltec word Cuauhtemallan, which means “land of trees”. The word Kuautemalli from the Aztec language, which means pear tree, is similar. Coctemalan , on the other hand, is the name of the milkweed plant that increasingly grows in the highlands of the country. At least the name seems to have something to do with plants!

Country of the volcanoes

There are repeated earthquakes and volcanic eruptions in Guatemala. The reason for this is the meeting of two tectonic plates. There are 37 volcanoes in Guatemala, four of which are still active.

The central highlands take up a quarter of the country’s area. In the northwest runs the Sierra de los Cuchumatanes mountain range, south of it the Sierra Madre, which comes from Mexico. Several volcanoes belong to it, including the Tajumulco, which is also the highest mountain in Guatemala. In the highlands there are grass areas and rainforest. The highlands are the most densely populated area in the country. The capital, Guatemala City, is also here.

A drier area begins east of Guatemala City. Some of the grass areas even merge into a thorn bush savanna. On the other hand, around Lake Izabal and on the Caribbean coast it is damp again. Tropical rainforest grows here. Lake Izabal is the largest lake in Guatemala.

In the north, in Petén, there is a lowland with tropical rainforest. This rainforest, Selva Maya, extends further into Belize and Mexico and is the second largest rainforest area in America (after the Amazon rainforest). This part of Guatemala is rather sparsely populated. Here is also the Petén-Itzá lake, the third largest lake in the country.

Guatemala is in the tropics. The Pacific coast, the mountainous highlands and the lowlands of Petén differ not only in terms of landscape, but also in terms of climate. It is warmer on the coasts than in the highlands.

Most of the rain in the country falls on the coasts and in Petén in the north. In the lowlands of Petén the rainy season lasts until December, on the coasts you can hardly distinguish between rainy and dry seasons, it is humid all year round. The tropical rainforest can also thrive here. Guatemala is repeatedly hit by hurricanes, mostly between June and November.

The maximum daily temperatures in Guatemala City range from 22 degrees in December to 29 degrees in May, so they don’t fluctuate much all year round. On the Caribbean coast it is 27 to 31 degrees during the day, so it is a lot hotter. In Flores in the northern lowlands it is even 27 to 33 degrees. For comparison: In Germany, the monthly average temperatures during the day vary at around 3 to 22 degrees.