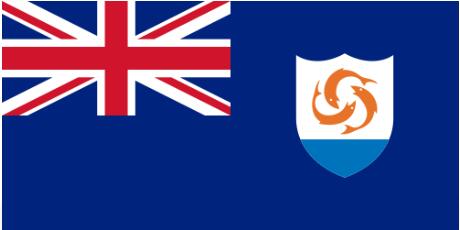 The Anguilla flag is blue with the British flag in the upper left corner and has Anguilla’s coat of arms on the right.

The area of ​​Anguilla is 91 km2, while the “associated” island, Sombrero, covers an area of ​​5 km2. They belong to the archipelago of Sotavento. The climate is tropical. Significant salt deposits.

The people: Anguilla’s population is descended from African slaves, with a certain percentage of mulattoes, descendants of the European colonizers. who also find an English minority group. Many of the residents live permanently on the North American islands, such as Virgin Islands.

Language: English is the official language.

Government: Victor Banks, Head of Government since April 2015. Christina Scott, Governor General, appointed by the British Crown in April 2009. The Advisory Assembly, which is part of the one-chamber system, consists of 11 members, of whom the 7 are elected on the basis of free general elections for a period of 5 years.