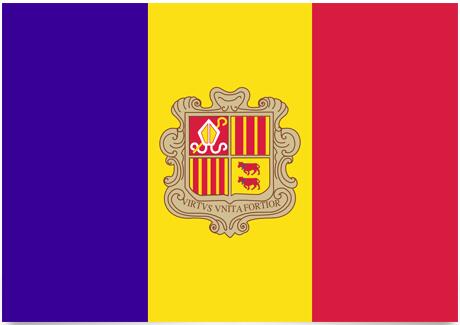 Andorra’s flag is a vertical tricolor with stripes in yellow, red and blue and has Andorra’s coat of arms in the middle. The flag was officially adopted on July 10, 1996 but has been in use since the 1870s. Spain and France have a strong influence on Andorra that is why the flag has the colors it has. Red and yellow appearing in the Spanish flag and blue and red appearing in the French ditto. There are also French and Spanish symbols in the coat of arms on the flag representing Andorra’s historical rulers, Bishop Urgel and Count of Foix.

The Principality of Andorra is located in the eastern Pyrenees. The countryside is characterized by valleys surrounded by 1800-3000 meters high mountains. The rivers Valira de Ordino and Valira de Carrillo merge into Andorra and become the Valira river. Grains are grown in the valleys. Cattle farming was formerly the most important economic activity, but is now replaced by tourism.

Government: Parliamentary Republic. The Constitution has been in effect since March 14, 1993. The Bishop of Urgell (in Spanish jurisdiction) and the French President represented by Francesc Badia-Batalla and Louis Deblé share the prince’s rights. Liberal Albert Pintat Santolária has been President of the Executive Council since May 27, 2005. Parliament has 1 chamber with 28 members elected by direct election for a four-year term. In the future, complete independence of France and the Spanish Church is foreseen.