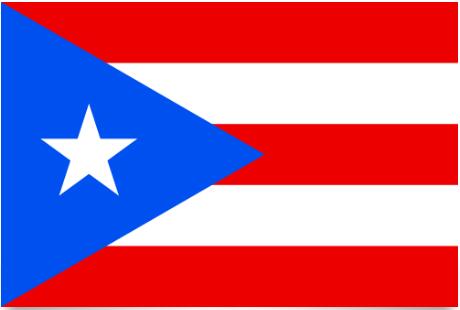 The white star is a symbol of the nation and the triangle represents the three different parts of the ruling power which are government, parliament and court. Red is a symbol of blood, white is the color of victory and peace, the color blue is a classic symbol of heaven and sea. The flag was adopted in 1894.

Puerto Rico is the easternmost and smallest of the major islands in the Caribbean. The Cordillera Central mountain range intersects the island in an east-west direction. In the highlands subsistence farming – maize and cassava is practiced. Coffee is grown on the western slopes of the mountain range. In the central part are smaller tobacco plantations, and on the northern slopes citrus fruits and pineapples are exported to the United States. However, the most important agricultural product is sugarcane grown on the best soils in coastal areas. Also included in Puerto Rico are the small islands of Vieques (43 km2), Mona (40 km2) and Culebra.

The people: The majority of Puerto Ricans are mestizos, descended from Spaniards (80%) and African slaves (20%). About 2 million have emigrated to the United States to escape unemployment and poverty.

Languages: Spanish and English (official). In governmental relations with the United States, English is used. In 1993 it was accepted to introduce English into teaching, administration and communication, and it was made official language in line with Spanish.

Government: Ricardo Rosselló, the country’s governor since January 2017. The House has 2 chambers: the House of Representatives with 51 seats and the Senate with 29.