Puerto Rico, officially English Commonwealth of Puerto Rico, Spanish Estado libre asociado de Puerto Rico, island of the Caribbean which together with a number of smaller islands form an autonomous part of the United States; 9,000 km2, 3.3 million residents (2018).Puerto Rico, the easternmost and smallest island in the archipelago of the Greater Antilles, is surrounded by the Atlantic Ocean in the north and the Caribbean Sea in the south. The closest neighbor to the west is the Dominican Republic and to the east the Virgin Islands. The main islands next to the main island are Vieques, Culebra and Mona.

Originally inhabited by indigenous Indians, Puerto Rico was discovered by European in 1495, when Christopher Columbus arrived on the island. In 1509 it was colonized by Spain. On September 15, 1821, independence was declared. In 1898, the Spanish-American War ended with Spanish defeat, and Puerto Rico passed to the United States. In 1917, Puerto Ricans were granted U.S. citizenship, and after 1952, obtained the status of U.S. territory.

Manufacturing, tourism, garment, and electronic industries are the main productive sectors. Manufacturing accounts for 40% of the gross national product. The living standards are amongst the highest in Latin America. 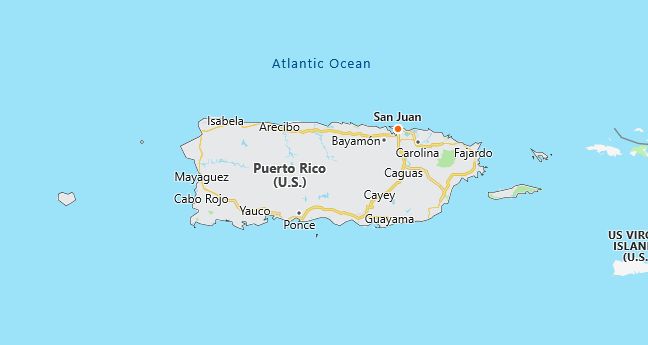 The basis for Puerto Rico’s rapid economic development after World War II has been major US investments, protection duties and tax relief for US companies. Industry has taken over agriculture’s role as the most important sector in business. The formerly dominant sugar industry has been replaced by the textile, electronics, mechanical and chemical industries. Puerto Rico is also a major producer of pharmaceuticals. Trade, service and tourism are other important industries. Puerto Rico’s economy grew until 2006, after which the economy has shrunk. In 2016, just over 40 percent of the population was estimated to be below the World Bank’s poverty line. In 2015 and -16, the financial problems have grown and in May 2016, Puerto Rico was forced to suspend payment commitments of SEK 3.4 billion.

The state of origin dates from 1952 and gives Puerto Rico status as a free state associated with the United States. The executive is exercised by a governor, who is elected for four years, and the legislature by a Senate with 27 members and a House of Representatives with 51, elected for four years.

The dominant political battle issue has long been the relationship with the United States, which is reflected in the country’s three parties, Partido Nueva Progresista, PNP, which wants to make Puerto Rico the state of the United States, Partido Popular Democrático, PPD, which wants to maintain its current status, and Partido Indepentista Puertorriqueño, PIP, who wants to make Puerto Rico a completely independent state.

In the election to the House of Representatives and the Senate in 2012, the PPD won, and its candidate Alejandro García Padilla also won the governorship election.

Referendums on the status of the country were held in 1967, 1993, 1998 and 2012. In the first three referendums, the line that wanted to keep the country’s status unchanged, but in 2012 the state line won by 61 percent against 33 percent for unchanged status and just over 5 percent for independence. Nearly a quarter, however, voted blankly, which means support for the state line is still considered insufficient. Further referendum on the issue is therefore to be expected. The decisive decision will be made in the US Congress, which is likely to set tough conditions to approve the state of Puerto Rico.

During the 19th century, a national literature was founded in Puerto Rico. The 20th century’s literature has been largely influenced by Puerto Rico’s special connection to the United States following the liberation from colonial power Spain in 1898. Especially Enrique A. Laguerre has in his novels touched on Puerto Rican identity, a theme that was later developed by José Luis González and Luis Rafael Sánchez. Modern avant-garde poetry at the beginning of the 20th century originated in Puerto Rico through Luis Lloréns Torres and his journal Revista de las Antillas. Luis Palés Matos was an initiated interpreter of the conditions of the black population. The culture of Puerto Rico is deeply rooted in the Spanish language, but among the large immigrant groups in the United States there has also emerged significant literature in English with writers such as Piri Thomas.

Grupo Areyto, founded by Emilio S. Belaval in 1940, laid the foundation for a lively theater business in Puerto Rico, both nationally colored and of modern cut. René Marqués raised his dependence on the United States, as did Luis Rafael Sánchez. Among Puerto Rico’s other playwrights are Manuel Méndez Ballester, Fernando Sierra Berdecía, Francisco Arriví and Myrna Casas. Puerto Rican theater has also made notable efforts in the United States, especially the Puerto Rico Traveling Theater in New York, led by actress Miriam Colón.

During the colonial era, the cathedral was the most important center of art music. In the beginning of the 19th century, a theater for opera and zarzuela was founded and a musical academy. The indigenous lounge style danza appeared in stylized form in concert music by, among others, Manuel Gregorio Tavárez ( 1843–83 ) from the middle of the century. Folk musical elements were used more frequently from the mid-20th century.

Dance and musical styles of Spanish origin appears most clearly in the interior of Puerto Rico, for example, seis -danser while rolling criollo, mazurka and polka are of recent European origin. Typical instruments are the string instruments guitar and cuatro. The African influence is more evident at the coasts, with styles such as bombing (responsorial singing with drum accompaniment), lawn (storytelling) and baquiné (watching over a child who has died).

Puerto Rico is strongly associated with the development of the salsa, through both musicians from the island and the Puerto Rican music culture in New York. Some of the style’s forerunners and early performers were the orchestral conductors Manuel Jiménez ( 1895–1975 ) and Rafael Cortijo (1928–92) with singer Ismael Rivera (1931–87), who modernized the plenary style. Also important were the post-war “mambo kings”, Tito Rodríguez (1923–73) and Tito Puente (1923–2000). From the Cuban Latin jazz, plena and other styles, the salsa emerged during the 1960s-1970s. Central Puerto Rican artists are the group El Gran Combo (formed in 1962), the singers Hector Lavoe (1946–93), Gilberto Santa Rosa (born 1962) and La India (born 1969).

Puerto Rico is also the center of the dance music style reggaeton, a mix of Spanish-language reggae, hip-hop and electronica with internationally renowned artists such as Daddy Yankee (born 1977) and Don Omar (born 1978).