Burma, also known as Myanmar, Republic of Southeast Asia; 677,000 km2, 53.7 million residents (2019).Burma borders north and northeast to China, east to Laos and Thailand and west to Bangladesh and India, and also has coast to Andaman Sea in the south and the Bengal Gulf in the west. Since November 2005, Naypyidaw is the new administrative capital. It has 333,300 residents (2014) and is located 320 km north of the former capital Rangoon (Yangon).

Burma has a terrain determined by north-south bedrock structures. In the northern mountainous regions, several of the major rivers in Southeast Asia begin their journey towards the sea. The western mountain ranges, which form a border with India, continue south as the Arakan Mountains all the way out to Cape Negrais. To the east, there is an elongated central basin area with the Irrawaddy, Chindwin and Sittang rivers. In the far east, the wide Shan plateau rises. The coastal area is occupied by a large number of deltas. Burma has a tropical monsoon climate.

After 48 years of military rule, Burma 2010 formally became a civil-led parliamentary democracy. The president is elected for five years. The country became independent in 1948.

Burma has fertile soil and significant assets in forests, minerals, water energy and other energy resources. The economy is based on agriculture and processing of agricultural products. For shorter periods, the country has tried to implement economic reform programs, but most of the times the trials have not been completed. A large part of the economy consists of the so-called informal sector, which is outside the control of the authorities. The country has large oil and gas resources, but production is limited by inefficient infrastructure. 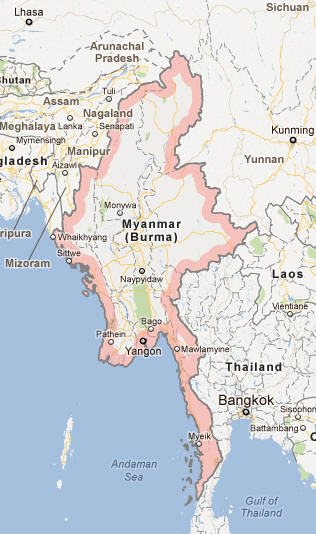