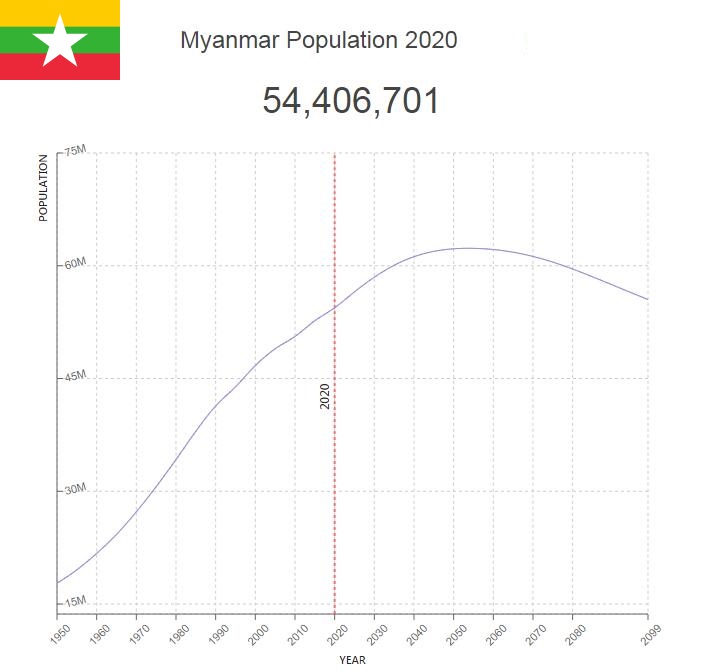 Myanmar was long isolated by many other countries because of a brutal military junta rule. Since 2011, the country has moved in a more democratic direction. There are great tensions between different ethnic groups in the country.

The population figures in Myanmar are very uncertain, but in 2001 the population was estimated at 48.4 million by the UN, and estimates for 2013 by the World Bank are 53.4 million. 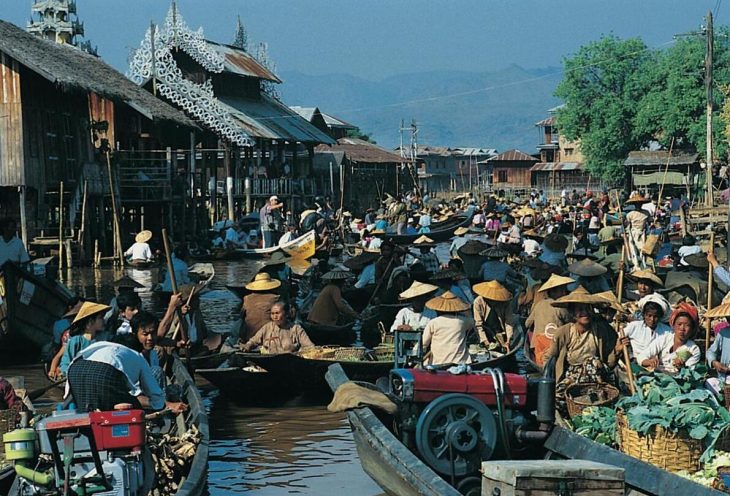 The Burmese are the largest group of people and constitute approximately 2/3 of the population. These are concentrated to the fertile river valleys in the southern and central part of the country as well as to the coastal region in the southeast. The Burmese speak a Tibetan-Burmese language from the eastern Himalayas.

The Mon people and Rakhines also inhabit the lowland areas. The Mon people, who speak a Mon-Khmer language, inhabited the areas around the Gulf of Mottama (Martaban Bay) several centuries before the Burmese immigration. Until the 16th century, they fought with the Burmese for control of the country. Although the monks have largely been assimilated with the Burmese, they have contributed significant elements of Burmese culture (including Buddhism).

The Rakhs, who inhabit the west coast, speak a Tibetan-Burmese language, and most are Buddhists. They had independent kingdoms until the 18th century. The rest of the population includes a number of highland and mountain people. Myanmar’s borders are defined by mountainous areas and not ethnic divides, and therefore many people live on both sides of the border areas. The Shan people are located on the Shan Plateau and include approximately 10% of the population. They speak an Austro-Thai language, and are closely related to the Thai population.

The Karen people (by the authorities called the Kayin people) include approximately 7% and speak a carnal language. They mainly reside in areas along the border with Thailand from the southern part of the Shan Plateau and south. However, many have migrated to the low lying areas around Mawlamyine (Moulmein) and the Ayeyarwadi Delta. According to their own legends, the Karan people originally came from an area around the Gobi Desert. Most are Buddhists, but approximately 20% are Christians. One of the male groups, the pada young people, is often called “long-necked” guys or “giraffe women”, following the custom of extending the women’s throats by stacking up to 22 kg with brass rings around their necks.

Both Kachin and Chin people speak Tibetan-Burmese languages. Traditionally, they both practice sweat farming, and they are skilled hunters. Most practice natural religions, but a minority are Christians.

During the British colonial period, a large number of Indians and Chinese immigrated, but a large proportion (especially of Indians) later fled the country. While most Indians settled in Yangon (Rangoon) and the Ayeyarwadi Delta, most Chinese settled in the Mandalay area and along the northeast trade routes. Since independence, many ethnic groups have felt politically, economically and culturally suppressed by the central government, and several of them have taken up armed struggles for independence or greater autonomy. For long periods, the central authorities have had a lack of control over much of the minority areas. The acts of war led to large flows of refugees both internally in Myanmar and across the border in Thailand. It is estimated (2002) that 645,000 either lived in hiding in jungle areas or were forcibly transferred to specially created camps in Myanmar. In Myanmar, 140,000 live in refugee camps along the border, and up to one million live as illegal job seekers. In the western state of Rakhine (Arakan), approximately 20% of the population is the Muslim minority group Rohingya. These are not recognized as a minority by the military junta. At times, over 200,000 have fled across the border to Bangladesh, where they are declared undesirable.

3/4 of the population lives in Ayeyarwadybekkenet and along the coast. The density is highest in the delta area, especially around Yangon (200 per km2). The areas around Mandalay and parts of the Rakhine coast have a similar density. The Ayeyarwady Basin in general and the areas around Thanlwin’s lower course have 50–200 per km2, while the Shan Plateau and the western and northern mountainous areas are significantly thinner. The largest city is Yangon (Rangoon) with 4.5 million homes (UN estimates 2001). Other major cities are Mandalay, Mawlamyine (Moulmein), Bago (Pegu) and Pathein (Bassein). In November 2005, the authorities decided without warning to move the capital’s functions from Yangon to a location just outside Pyinmana. In March 2006, the new capital was named Naypyidaw.

Population of Myanmar by Year (Historical)

Major Cities in Myanmar by Population