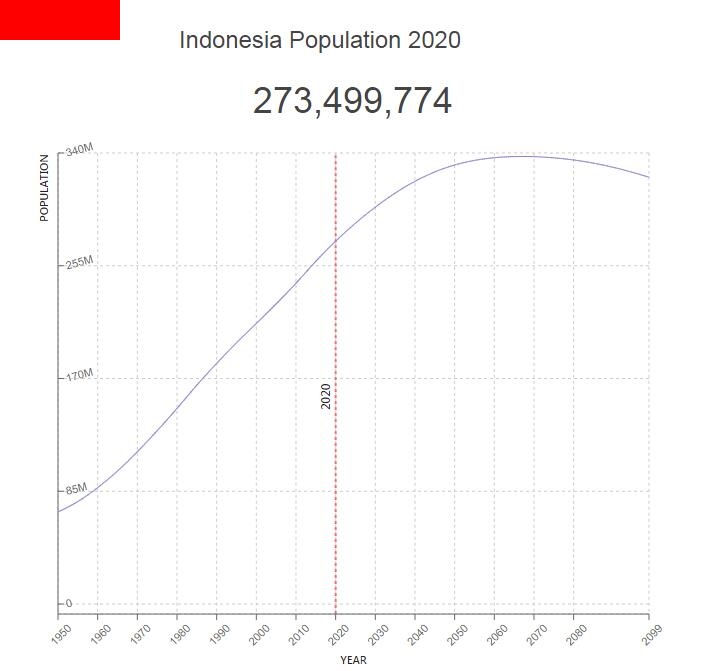 Indonesia is the world’s fourth most populous state. The country is an archipelago located in an area where three parts of the earth’s crust meet. Earthquakes are a common phenomenon and the tsunami of 2004 hit Indonesia hard. 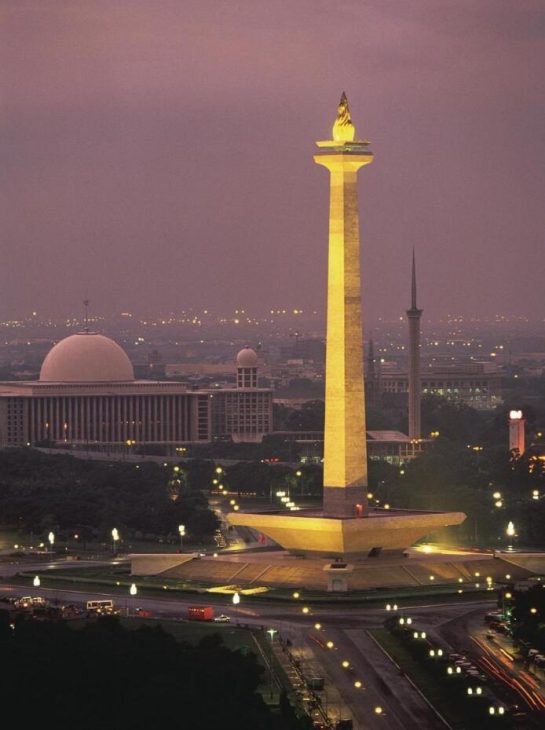 Population of Indonesia by Year (Historical)

Major Cities in Indonesia by Population

Settlement of the population

The average population density is 149 residents per square kilometer. This is not particularly high, but is highly misleading. 56.7 percent of the population lives on the island of Java (with Madura), which with 1,160 residents per square kilometer is among the most densely populated areas in the world (2019). By comparison, Indonesia’s largest island, Sumatra, has 131 residents per square kilometer. A costly migration program (transmigration), which started in the colonial period, has since 1969 transferred more than two million from Java, Bali and Lombok to Sumatra, Kalimantan, Papua and the Moluccas. The project has mostly included poor farmers and some homeless urban dwellers. So far, the project has had little effect, primarily because it is physically difficult to transfer many enough people. In many places, the transmigrants have come into conflict with the local people groups. The project has also caused environmental problems in that wet rice cultivation has been attempted in areas unsuitable for this. It is estimated that 3.5 million hectares of rainforest has been cut down to accommodate the transmigrants.

Indonesia is a country of villages, which vary greatly in shape and size. The villages of Java are large, compact and densely situated in the populous countryside. In the outer islands, the villages are more diverse and reflect the great differences in regional culture. A large relocation from rural areas to the capital of Jakarta and the largest regional cities has led to a strong increase in the population of the cities. The problems that this has caused for Jakarta were the reason why President Joko Widodo announced in 2019 that the government plans to move the country’s capital from Jakarta to the eastern part of Kalimantan.

Many immigration waves since prehistoric times have left a complicated pattern with many ethnic groups and languages. Most of the residents are Malays, which encompass widely different cultures. Larger groups are Javanese (40.1 percent) in Central and Eastern Java, Balinese, Old Malay Dajaks in the interior of Kalimantan, Sundanese (15.5 percent) in West Java, Madurese in East Java and Madura, the Menang Kebabs at The west coast of Sumatra, the Acehnese on North Sumatra and the Buginese on southern Sulawesi.

The complicated ethnic pattern has created the basis for separatist movements both in Aceh (North Sumatra, North Sulawesi, Southern Moluccas) and Papua. Nevertheless, the suppression under the Dutch colonial rule and the problematic liberation helped to unite large parts of the people into a national unity.

The largest non-local population is the Chinese, which in 2010 made up 1.2 percent of the population. The figure is very uncertain as many will not admit Chinese origin. Most Chinese live on the west coast of Kalimantan, the east coast of Sumatra and the islands (Bangka, Belitung, Bintan). Virtually the entire Dutch population (60,000 in 1957) left the country after independence. Indigenous peoples are among others the esteem in the interior of Sumatra and Papuan-speaking people in the Moluccas.